Guest opinion: Is diesel running out of road?

With 2016 a record year for car registrations, it’s probably fair to say that the industry is booming.

And while this growth has continued into 2017, there are some areas of the sector that haven’t enjoyed in this success.

As you may have guessed, I am referring to the downfall of diesel. Something that the British automotive media has been chronicling, with endless headlines declaring that this is the end of the fuel type, and multiple advice columns telling buyers to switch over to petrol.

The truth, of course, is less black and white than that.

While there’s no doubt that diesel has seen a decline. Our research here at JATO Dynamics shows that UK diesel registrations actually hit a peak in 2016, with 1.29 million units being registered.

In fact, despite overall UK registrations increasing by a healthy 6.2% in the first quarter of 2017, registrations of diesel cars actually fell by 1.0% .

Looking at this evidence, you can see why many claim that diesel is running out of road. 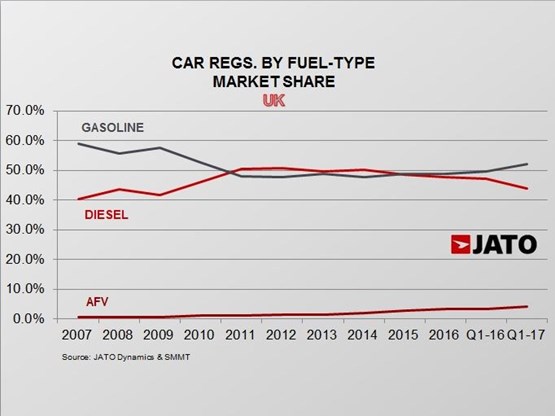 SUVs rule the roost when it comes to diesel

However, it’s not all doom and gloom just yet. SUVs, which have always ruled the roost when it comes to diesel, continue to perform strongly.

For Q1 2017, 45% of total diesel registrations were SUVs. This is 4ppts more when compared to Q1 2016. So clearly, SUVs will be an important segment for the future of diesel, but that segment alone can’t stop its decline.

Taking a look at other segments, it’s clear to see where diesel is running into trouble.

Compact diesel cars, the second largest segment when it comes to diesel, have seen a 13% fall in volume of registrations from Q1 2016 to Q1 2017. Less significant, but still of note, is the decline in volume of midsize diesel cars over the same period, which stands at 4%. 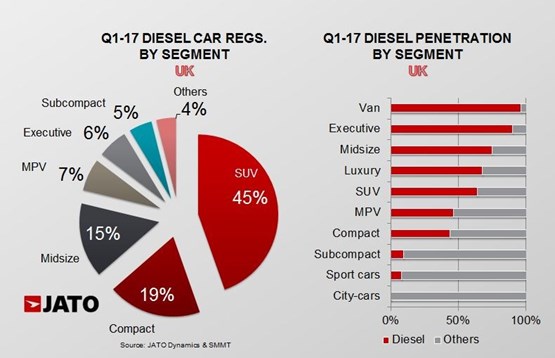 The rise of alternative fuels

When looking at diesel’s performance, it’s impossible to discount the impact that alternative fuel vehicles (AFV) have had.

Although they account for just over 4% of total registrations in the UK, and are still a bit of a rare sight on the roads, these cars have been consistently growing their market share for the last 10 years.

AFVs have benefited from a continuous push by marketers for consumers to buy these vehicles, combined with Government incentives such as tax benefits – which means their market share is continuing to grow, as shown by their record market share to date of 4.1% for Q1 2017.

In parallel with this, “dieselgate” has caused governments and the media to target diesel as a key factor in the fight to improve the environment.

For example, you only need to take a look at discussions by the UK Government to introduce a diesel scrappage scheme and make motorists with polluting vehicles pay to drive in particular areas.

The measures aren’t intended to single out diesel vehicles, but there’s no doubt that these discussions are enough to make consumers wary of buying diesel.

So while diesel has experienced a decline, the news of its death may have been greatly exaggerated.

Our data shows a clear decline in its mass popularity, with more and more consumers switching over to petrol and AFVs.

However, it could be that the future of diesel is within upmarket segments and premium brands.

It seems then that we could witness diesel becoming something of an exclusive fuel type in the future, whilst AFVs continue to cash-in on its decline in the compact car segment, and petrol cars consolidate their position in the market.