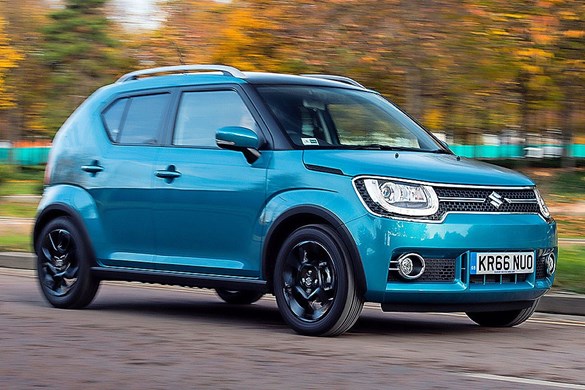 In the flight to Rome for the launch of the new Suzuki Ignis, I encountered my first ‘influencer’.

My new acquaintance was not Kim Kardashian or Taylor Swift, but his 11,000 Instagram followers qualify him as a recipient of free holidays, fashion and technology in return for online exposure.

His presence on the Ignis launch illustrates just how much Suzuki wants its new product to reach a millennial audience.

Suzuki aims to steal sales from the Citroën DS 3, Fiat 500 and Renault Twingo, but with the Ignis’s 180mm ground clearance and the option of four-wheel-drive – plus a mild hybrid drivetrain – the closest rival identified along the Italian test route was a Fiat Panda 4x4.

The rear seats slide forward by 165mm to expand the standard 267-litre boot.

The dual-camera brake support (DCBS) system standard on the range-topping SZ5 provides automated braking assistance, lane departure and weave warning systems and brings the Ignis up to a five-star Euro NCAP rating from three stars without.

A grille and headlights evocative of the Swift and old Grand Vitara look good, but the rear looks taller and more awkward.  That said, the high roofline liberates impressive headroom.

The cabin is colourful and quirky, with the option of a largely white interior

complemented by orange or titanium-coloured highlights. Rocker switches add style, but the Ignis’ budget car status is evident in some flexy plastic surfaces.

On the road, the 1.2-litre felt a little slow to respond, the brakes did not deliver immediate bite and the steering was light.

The Ignis is more composed and assured at speed with the addition of the SHVS system’s added torque. The steering of the 4x4 SZ5 also boasts reassuring weight.

On the return flight, the ‘influencer’ told me his coverage would not include the Ignis’ specification or dynamics.

The truth is, most 25- to 30-somethings looking on Instagram for an A-segment car offering “something different” probably won’t be bothered either.

They should pay more attention. The Ignis serves up a lot of car in an affordable package.