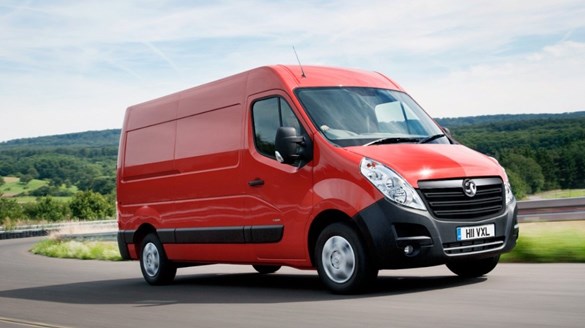 While Vauxhall has very much been concentrating on the Vivaro as its volume seller, the new Movano has been upgraded to keep it competitive.

The Movano's design has been tweaked at the front end and there is a new set of engines promising more fuel-efficiency. It is now available in front- and rear-wheel drive too, in line with its rival from the blue oval.

The model also comes in the usual array of shapes and sizes, and features a 2.3-litre turbodiesel powerplant offering 110bhp, 125bhp, 136bhp and 163bhp. The more powerful models have a twin-turbo unit fitted.

Our test model, which is priced at £25,738.33 ex-VAT, with the 136bhp engine. It gets an Ecoflex moniker, which denotes a standard stop-start system and other  efficiency adjustments which equate to an official fuel economy figure of 40.9mpg on the combined cycle.

The Movano has a commanding presence on the road, while its lower quarters and sides feature black plastic guards to stop knocks and scrapes.

Despite its size, the Movano is very easy to drive, in part due to the 2.3-litre engine. It shifts the van, even under a full load, with ease. Maneuverability is impressive, even when navigating through some tight London streets and parked cars.

There are some nice touches on the interior with a clipboard that pops out of a hole in the upper dash, passenger seats that lifted up to reveal hidden storage areas, a 12-volt take-off on top of the dash so that a plug-in sat-nav didn’t leave wires dangling all over the place and no fewer than four coffee cup holders.

Our test model had a TomTom sat-nav built in, but at £960 it's not clear what business would pay that price when a smartphone cradle or their own portable sat-nav would do.

There's ample space in the back to stand up while loading in big items and there are six load-lashing eyes in the floor, with two more on the sides near the rear door. The van also features full ply-lining for £175 which can help keep the rear of the van clear.