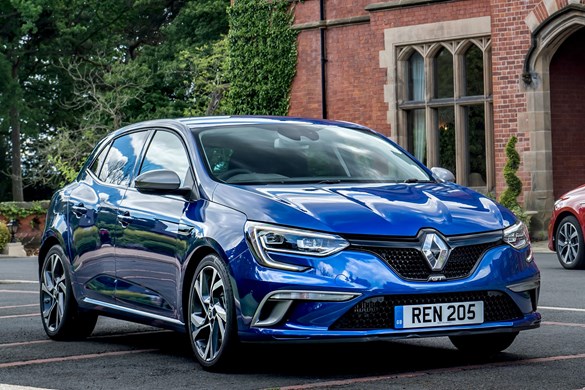 Renault is as aware as any manufacturer of the market’s move towards SUVs in recent years. In the first eight months of this year, 27,367 of its 50,837 registrations were for either the Captur, its best-seller, or the Kadjar, according to Society of Motor Manufacturers & Traders (SMMT) statistics.

As Megane sales slumped towards the end of its life-cycle (down 35% in hatchback form and 54% as a coupé year-on-year) it was Renault’s loftier family vehicles that drove it to 15.4% growth year-to-date.

Now there is hope the all-new Megane might be able to add to that tally and take a chunk out of the big-selling trio of Golf, Focus and Astra who continue to battle against the SUV trend.

Paul Flanagan, managing director, Groupe Renault UK, said: “Obviously we have seen the C-segment move towards SUVs – a trend we have benefited from – but the bulk of sales are still in the more conventional hatchback style and the new Megane is well placed to take advantage.”

Among the technical highlights of the range-topping GT, meanwhile, are 4Control four-wheel steering and a seven-speed EDC dual clutch, automatic gearbox with multiple downshift and launch control functions.

Former Ford man Flanagan took up his post on May 1 with the Megane entering dealerships two months later as the brand celebrated a 21% year-on-year sales rise (44,570) in H1.

Flanagan said: “The technology and the quality of the new model really do represent steps up so I know our dealers will benefit from its inclusion in the range.”

Renault offers a four-year/100,000-mile warranty and roadside assistance cover and service plans are available across the range, with a three year/30,000-mile offering costing £299 and four years/40,000 miles covered for £499.

The Dynamique S Nav dCi 110 proved refined and frugal. Renault’s efforts to improve interior quality are evident through the swathe of soft-touch plastic which covers the dashboard and the Volvo-like central display.

Ambient lighting illuminates the centre console and door cards with neat pinstripes of lights and the seats are both supportive and comfortable, with good lumbar support.

The Renault-Nissan Alliance’s 1.5-litre turbodiesel is not be one of the market’s quieter engines, but the Megane’s sound-deadening maintains subdued progress.

Sitting on Renault’s new CMF platform, the new Megane’s wheelbase is some 28mm longer and considerably wider (47mm front, 39mm rear) than its predecessor, while having the lowest roofline in its class (25mm lower at 1,447mm).

Inside there’s enough headroom for a 6ft-plus adult in the rear and the boot space is an impressive 384 litres, bigger than the Golf or Focus but well down on the similarly-proportioned Peugeot 308’s 407 litres.

The Megane is a comfortable and composed steer in Dynamique S Nav form. The surprise is that the sportier GT Nav initially has such a similar feel.

Customers may find it feels softer and less immediate than expected of a car capable of a 7.1 second dash to 62mph and 146mph top speed, the engine refined, gear changes smooth through imprecise paddle shifters should you choose to use them.

In October, dealerships will see the arrival of a Sport Tourer, with a hybrid due in 2017 and a Renault Sport version, no doubt, in the pipeline.

Flanagan’s only concern is how the 170-strong dealership network will react to the ever-growing Renault proposition. He said: “You might struggle to accommodate all the new models we have launched in the past year alone in a showroom. We will have to be pragmatic about how many vehicles we send to dealers. At the moment I’ll take all the vehicles I can.”