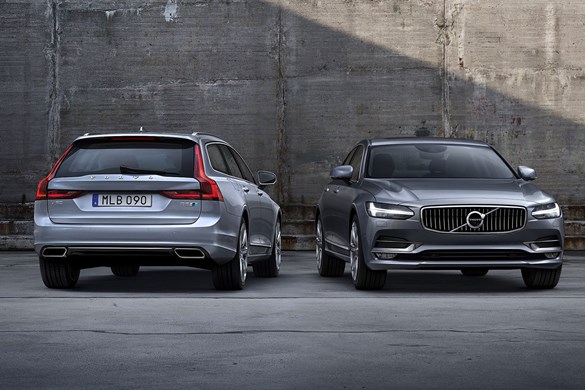 Following the success of the XC90 SUV was never going to be a small feat, but the new S90 and V90 could see Volvo’s winning streak continue.

In 2010, Volvo’s acquisition by Chinese multinational Geely followed an uneasy few years for the Swedish manufacturer as it trimmed resources after former owner Ford announced its desire to sell.

Six years later and Volvo’s swagger, if it ever had one, is back.

Volvo UK’s head of product and pricing, Iain Howat, said: “Five or six years ago, people were writing us off. Now we are a manufacturer on the move and the franchised dealers have a lot to look forward to.”

Volvo has projected sales of 5,000 for the pair and, after just 500 registrations in 2015 of the outgoing S80 saloon, Howat said sales would be considered “100% conquest”.

With about 75% of those registrations expected to come from fleet, a T8 hybrid drivetrain will be warmly received early next year. Combining a 316bhp petrol engine and 86bhp electric motor, the hybrid will have CO2 emissions as low as 44g/km.

The new S90 and V90 sit on a new Scalable Model Architecture, a platform that allows Volvo to tailor the dimensions on a range of future products.

Both Volvos score points for their interior accommodation, however, and Volvo justifies that near five-metre length with impressive rear leg room.

Crisp, Swedish interior design mirrors that found in the XC90, and the nine-inch portrait Sensus Connect touchscreen is the most dominant familiar feature in a cabin swathed in leather and other high-quality materials.

Sensus Connect brings access to a range of web apps and connected service booking, enabling the car to pre-book itself into a chosen Volvo dealership.

Satnav and dual-zone climate control are also among the standard equipment.

Outside, the newcomers feature the ‘Thor’s Hammer’ LED headlight design featured on the XC90, with automatic high beam, and an electric boot lid.

As part of Volvo’s ‘2020 vision’ – that no one should be killed or seriously injured in a new Volvo car by 2020 – the S90 and V90 also include a broad range of safety technology.

Meanwhile, Volvo has taken a further step towards autonomous driving with the introduction of Pilot Assist and adaptive cruise control. Together, the systems will maintain the cars’ course within a marked lane at speeds of up to 80mph.

In terms of sheer interior space and comfort, Volvo’s newcomers are standard-setting and the styling of the V90, in particular, gained the favour of various motoring journalists on its recent launch.

Howat said: “Volvo was once the market leader in the D/E estate segment and our hopes are that this is the car that will put us right up there with the most popular premium contenders in the class.

“We had a fairly chequered history with Ford but everyone is delighted about the direction the new cars are taking us.”

While the new models are not scheduled to receive a makeover from Volvo’s performance arm, Polestar, any time soon, R-Design models will feature a sport chassis, unique grille and piano black trim. A new five-spoke
matt black diamond-cut wheel also adds to the performance feel.

Volvo said “sporty contour seats and special steering wheel” would be part of the interior highlights.

Order books are now open for the S90 and V90 R-Design models, with UK delivery dates to be announced in Q3.