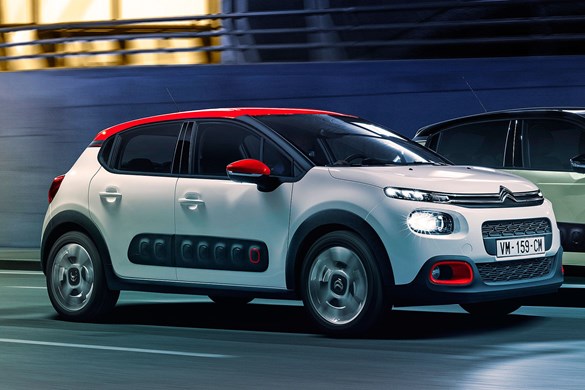 Citroën’s mainstream C3 has undergone a C4 Cactus-style makeover, which may have handed franchisees the tools to compete with its show-stealing PSA Group stablemate, the DS 3.

As Citroën UK’s brand director, Bek Hassan, admitted that only about half of the Citroën network was destined to hold on to the DS Automobiles franchise that yielded so many DS 3 hatchback sales in recent years (see page 6), the new five-door C3 has arrived to offer some cause for optimism among those about to lose out.

Built around Citroën’s ‘Advanced Comfort Programme’, the C3 looks to differentiate itself by majoring on day-to-day usability, rather than sporty dynamics, as well as quirky personalisation options that will be familiar to C4 Cactus fans.

Airbumps – polyurethane, air-filled pods fitted to each flank to prevent minor scuffs and bumps – make another appearance on range-topping Flair specification C3s, while contrasting roof and door mirror colours combine with Cactus-like high-mounted running daylights and bold fog lights to give a distinctive look that is mirrored inside the cabin.

Quirky and tactile, the cabin may be enough to lure customers into the new C3 before they have even turned a wheel, with fabric portions of dash, door-pulls and a novel ConnectedCAM system. ConnectedCAM offers C3 owners the chance to record their journeys on a full HD wide-angle camera positioned behind the rear-view mirror and share them instantly over the internet via a Bluetooth link to their smartphone.

The camera is also part of an autonomous emergency braking system and will record 30 seconds of footage before and after an impact, to assist in insurance claims.

It is part of a collection of new technology to feature on the C3, including Mirror Screen and Apple CarPlay smartphone connectivity, a reversing camera and blind-spot monitoring.

Speaking to AM at the launch of the C3 in Barcelona, Hassan expressed high hopes that the new C3 will be one of B-segment’s 10 biggest sellers from January and described the current model’s sales performance as “very poor”.

Hailing the newcomer as a vehicle that customers can “aspire to own”, he said: “We’re currently 18th-placed in the UK’s biggest market segment and that is very poor – no two ways about it. In the rest of Europe, the C3 accounts for around 20% of Citroën sales, but here in the UK it’s just 10% and that tells you all you need to know about the current model. It’s just not performing.

“With the new model, we’re aiming for the top 10 and that will account for a large part of our volume next year.”

Citroën will be sending cars on a tour of dealerships prior to its official on-sale date to help generate interest.

The C3 will be available in three trims (Touch, Feel and Flair) with a choice of 68PS, 82PS or 110PS turbocharged PureTech 1.2-litre petrol engines or 75PS or 100 PS 1.6-litre BlueHDi turbodiesel units.

A six-speed automatic gearbox option will be available with the 110 PureTech unit from March.

I got to drive 82PS and 110PS 1.2-litre petrol-engined versions of the car in Barcelona, just weeks after seeing it make its public debut at the Paris Motor Show.

The quickest C3 in the range is the 110PS Puretech, but  taking 9.6 seconds to go from 0-62mph means it may not appeal to the boy racers among the young audience the C3 is aimed at. However, claimed fuel efficiency of 64.2mpg and 104g/km CO2 emissions are worthy of greater consideration.

Among the standard equipment on all C3s is DAB radio, Bluetooth phone connectivity, cruise control, lane-departure warning and speed limit recognition, but, sadly, no air con or trademark AirBumps. Manual air conditioning is a £600 option on Touch, with Airbumps available on Feel cars for £290 as part of a ‘Style Pack’, which also includes fog lights with a cornering function.

Many of the highlights debut in the Feel trim, with exterior features including LED daytime-running lights, that contrasting roof, gloss black door mirrors and body-coloured door handles accompanied by a seven-inch colour touchscreen infotainment system with Mirror Screen and Apple CarPlay smartphone connectivity on the inside.

All Flair models get Airbumps and roof-coloured door mirrors along with the ConnectedCAM.

Top of the range is the £17,195 Flair 110 Puretech fitted with the most powerful engine’s optional six-speed automatic gearbox. Some of the best news is that the new C3 gets the PSA Group’s latest automatic gearbox.

During my stressful morning in Barcelona, I was relieved to find the new addition sheds the tardy gear changes of its predecessor to deliver swift shifts. While it can be a little indecisive in stop-start traffic, it is a vast improvement.

Escaping the Barcelona rush hour and finding some of the surrounding countryside’s mountainous open roads, the gearbox even displayed a determination to hold revs to deliver reliable acceleration with the lever pushed left into its ‘Sport’ setting.

The new C3 subscribes to a French love of soft springs and jaunty lean angles through corners, though, and is a laid-back proposition which, rather refreshingly, prioritises comfort.

Drive too quickly, though, and you will be missing out on the new C3’s key strength. This is a car for people who simply want to drink in the ambience of a truly unique cabin, those tired of the endless stream of gloomy plastic interiors.

Spec the C3 right – there are optional ‘Urban’ Red Ambience and ‘Hype’ Colorado Ambience interiors, priced at £150 and £380, respectively – and it boasts a cabin with more visual and tactile appeal than any current rival.

There are cheap plastics, but they are tucked away, with  more prominent areas trimmed in heavily textured fabrics.

One practical reservation remains. Despite an ample 300-litre boot, the C3’s rear quarters are cramped, a low ceiling making the rear space restrictive for adult passengers.

Hassan is excited about the C3 and it is clear that it boasts impressive showroom appeal: “C3 is the huge area of opportunity for us, in that larger, mainstream B-segment.

“I see the C3 and DS 3 as two cars targeting different areas of the market. C3 is the mainstream B-segment and DS 3 is the premium B-segment. There is a risk of some migration, but we are clearly targeting conquest customers.”