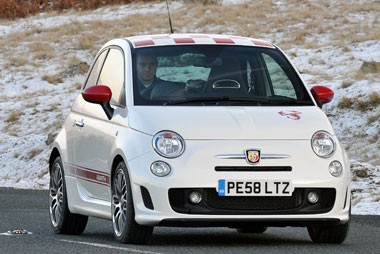 That’s an important part of its appeal for customers looking to express their individuality.

The Abarth takes the 500’s funky interior and turns up the testosterone with additions such as one-piece leather-covered front sports seats, a thick-rimmed flat-bottomed steering wheel and dash-mounted turbo boost gauge.

Fiat’s taken ideas from the Mini success story with a massive options list for customers to add on different decals, patterns and paint finishes. This car looks the part for its target audience and it’s solidly built too.

There’s also Blue&Me MAP which employs motor racing technology to help drivers improve their skills at the wheel through telemetry, in addition to offering satellite navigation.

The esseesse version allows drivers to further upgrade their car’s performance with a retro-fit kit. This boosts engine power to 160bhp using a re-mapped ECU (electronic control unit) and new air filter, as well as adding uprated brakes and springs along with unique 17-inch wheels.

The 500 Abarth is a faithful modern incarnation of the tuning firm’s ‘small but wicked’ mantra of the 1950s. While it’s not lightning quick in normal mode, push the sport button and it becomes a lot of fun to drive.

The sport button alters the engine’s power and torque characteristics for sportier responses, while increasing load through the electric power steering for a firmer steering feel and added poise in corners.

The difference between the two modes is quite staggering. The results are a top speed of 128mph while the 0-62mph dash takes 7.9 seconds.

Fiat does a proper Italian job on Abarth.