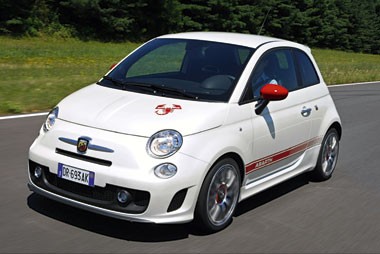 Around 15 Fiat dealers will be rubbing their hands with glee as they become the official sellers of the revitalised Abarth.

And in its bespoke red and white chequered corner of the showroom, they will now have 1,500 500 Abarths to sell annually, complete with high-margin tuning upgrades, styling enhancements, clothing, accessories and even its own Abarth oil.

Fiat has taken several leaves out of Mini’s book and is using the Abarth brand as a standalone tuning arm replete with ’60s-inspired iconoclasm.

For those not up to speed on Italian racing of the 1960s, Abarth was a tuning firm created by Austrian engineer Carlo Abarth in 1949 that turned little Fiats into unlikely racing cars.

It was subsumed into the Fiat conglomerate in 1971 and there it languished until now, when the Italians finally worked out what to do with it.

Abarth has taken the 500 and given it a turbo-charged 1.4-litre 16-valve T-Jet engine producing 135bhp, while most of the mechanicals on the car have been uprated: a rear roll bar, stiffer springs and dampers, Brembo disc brakes all round, lowered ride height and stickier rubber on either funky 16 or 17-inch rims. It’s a proper job.

Then there’s the new boggle-eyed front which looks just like the Abarth 695 racer of the ’60s, while there are deeper side skirts, a large rear spoiler and a new rear bumper with two very menacing pipes.

Does it perform as well as it looks?

And first impressions are right. With 135bhp, it’ll manage 0-62mph in 7.9 seconds and makes a pleasantly buzzy noise.

For prospective buyers used to the sedate accelerative charms of arch-rival Mini Cooper, it will feel pretty sparky.

As for the handling, it’s nippy without being a full hang-on-for-dear-life experience.

The 500 Abarth is well packaged, and great fun. No doubt those Fiat dealers will be thinking so, too.

Weaknesses: Getting hold of one