Four years after its launch, Alfa Romeo has updated the 147, and although it may look like merely a few cosmetic tweaks, much has changed under the skin. The main change is the intro-duction of a comfort suspension system – quite ironic for a brand that has always been renowned for its sporty heritage and driver focused cars.

The system, which is an optional extra on the entire range but standard on the 1.9-litre MultiJet version, combines a double wishbone front suspension with a MacPherson layout at the rear. The result is surprisingly good – the new 147 has a smoother ride, especially on less than perfect roads, but still retains the impressive handling it has always been known for, making it great fun to drive and a blast round twisty roads.

Alfa has also introduced a new higher output 150bhp version of its 1.9-litre MultiJet oil burner. Although this is only an extra 10bhp over the old unit, there is quite a noticeable difference, particularly in in-gear performance, and like the rest of the much-lauded M-Jet range it’s very un-dieselesque in terms of noise and refinement.

The styling changes are from the evolution not revolution school with a new larger rear light clusters and a new front end which brings it into line with the new family face of Alfa and gives it a more aggressive stance. Bizarrely the GTA version will remain unchanged, as was the 156 GTA when the range was facelifted.

Other changes include a new Easyspeed automatic gearbox, which is fundamentally the same as the Selespeed option but minus the steering wheel shift buttons.

A four-wheel drive version, based on the Q4 technology used in the 156 Crosswagon (not currently available in the UK) will also make it into the range after launch. 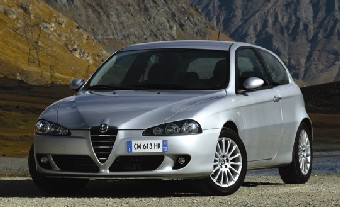 The Germans. It’s a phrase that appears in consumer roadtests on the 159 regularly, with the BMW named most often.