Audi A5 Cabriolet – on sale now 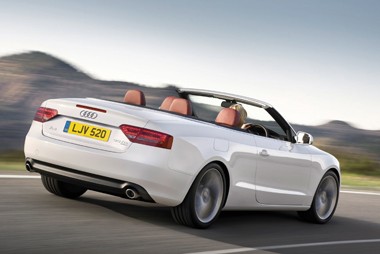 Audi has launched the new A5 Cabriolet with a number of prime factors in mind: the proportion of soft-tops in the premium B segment in Europe is expected to double by 2016, the market continues to grow, and the customer set is attractive to the marketeers – relatively young with high purchasing power.

It will initially come with two FSI direct injection petrol engines and one TDI diesel, the 3.0-litre TDI with quattro four-wheel drive as standard. Two more diesels will be on sale from late summer. Transmissions available are six-speed manual, S tronic twin-clutch and multitronic CVT.

Like the A4 Cabrio the A5 replaces, the retractable roof is of fabric.

The roof lowers in 15 seconds and is up again in 17, at up to speeds of 31mph. It also incorporates a heated glass rear window. An optional acoustic hood is available to reduce noise to “virtually the same level” as the A5 Coupé. With roof up luggage capacity for the four passengers is 380 litres; down it’s 320.

Audi pitches the A5 Cabriolet firmly against the BMW 3 Series Convertible and Mercedes-Benz CLK.

Clued-up Audi sales staff should be armed with the following facts.

Telegraph.co.uk
It’s a very mixed bag indeed, the A5 Cabriolet, but the real problem is that it doesn’t appear to offer many more sweets than the A4 version.

Autocar.co.uk
As a drive, there’s no doubt that a BMW 3 Series Cabrio is better, but this Audi is the better looker, provides more rear room and has the larger boot. And in 2.0-litre diesel form it’s pretty much all the cabriolet you’ll ever need.