Audi A5 Sportback – on sale October 3 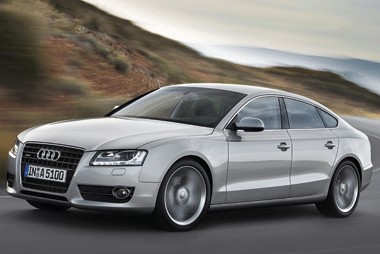 Manufacturers have been desperately trying to differentiate themselves from the competition with the melding of segments to offer customers more. So, the crossover was born.

Audi is trying to pin down a niche segment with the A5 Sportback for particular customers that want the space of a saloon, the large tailgate of an Avant and also still want the looks of a coupé.
It’s by no means a radical move away from the other models in the A5 range, with the front end and interior essentially the same.

The A5 Sportback is standard Audi fare and customers won’t be disappointed with the build quality which is of a high standard.
The Sportback completes the A5 range. It will enter showrooms in September, ahead of its October on sale date, and dealers will be hard pressed to fit in all of Audi’s mammoth model range.

Despite its extra length and doors, Audi has priced the Sportback below the Coupé, with the carmaker pitching the new variant as an entry-level model in the range, below the Coupé and Cabriolet.

The German brand is only looking to sell 550 of the new model from October to December and 4,700 in its first year of sales.
The UK network is expected to be aiming for about 5,000 sales in subsequent years.

Fleet will be a big focus for the A5 Sportback with Audi expecting corporate business to take a 70% slice.

There will be a choice of two petrol and two diesel engines and Audi is planning to phase in more options throughout the year.

BMW’s Efficient Dynamics have always made its models stand out in the long-term jostling with Audi, but all new A5s will feature stop-and-start technology, as well as a recuperation system that recovers energy during braking and deceleration and stores it temporarily in the battery.

While Audi isn’t shouting about these features or labelling them under a single umbrella like BMW, it will give Audi dealers more ammunition to battle their main rival manufacturer. As usual, Audi has lots of options for upselling.

Jeremy Hicks, Audi UK managing director, said: “We will not overheat any existing segment with forced sales. Instead, our objective is to expand our sales and market share through the addition of new models in segments where we have not competed before.”

Audi believes the fact that there is no direct competitor for the A5 Sportback will make it a success.