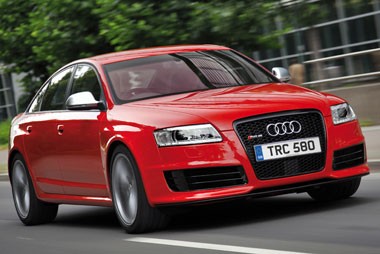 The RS6 is probably the least flashy supercar in existence. It might sound like a bit of an oversight to describe the RS6 as a supercar, but this £76,160 572bhp V10-powered beast offers scary performance figures.

It will hit 0-62mph in 4.5 seconds and while most cars that powerful suffer from thrashy torque steer, the RS6 delivers it very smoothly.

The appeal for customers in buying a car like this is that, other than petrol-heads, no one will assume they’re trying to be overly flashy. James Bond wouldn’t really be driving an Aston Martin in real life; he’d be driving one of these, the world’s most powerful executive saloon.

The multi-function display within the instruments feature a lap counter screen as well as turbo boost pressure and oil temperature read outs. The excellent sports seats not only look good, but offer superb support in all areas.

The RS6 can do a manufacturer-quoted 20.3mpg, but real world figures are more in the region of 12mpg. But if a customer is looking at spending this much money on a car, diabolical running costs aren’t
really much of an issue.

Audi sold 326 of the RS6 last year and just 81 were the saloon model as opposed to the Avant. There’s no word yet on whether or not there will be a successor, but its introduction certainly won’t be imminent, according to Audi.