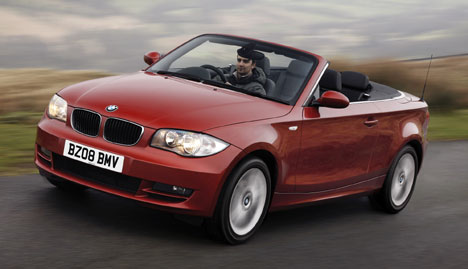 BMW is giving dealers a summer time stunner in the form of the 1 Series Convertible. The fourth member of the 1 Series family looks set to be an easy sell, although the Audi A3 convertible will no doubt put up a considerable fight.

With the electrically powered fabric hood up or down, the 1 Series Convertible looks elegant, refined and wonderfully proportioned.

It drives like a BMW should, with excellent poise and handling and, with a six-cylinder engine under the bonnet, it feels quite sporty.

Launched at the start of the month, dealers are already offering a 120i four-cylinder or 125i six-cylinder variant, and in a few weeks will get the three other derivatives; the entry-priced 118i, diesel 120d and the 135i V6 flagship.

BMW sees this car filling a gap that appeared when it chose a folding hard-top for its current 3 Series Convertible, which meant a significant price premium over the outgoing model.

While 1 Series Convertible certainly isn’t cheap, it puts the open-air BMW experience back within financial reach of many more private and business motorists.

That means the soft-top should account for around one in 10 of 1 Series’ annual sales.

Parsons admits the projected 10% share for the 120d could be an under-estimation as BMW has no historical sales of small diesel convertibles to compare against, and early orders already show much greater demand.