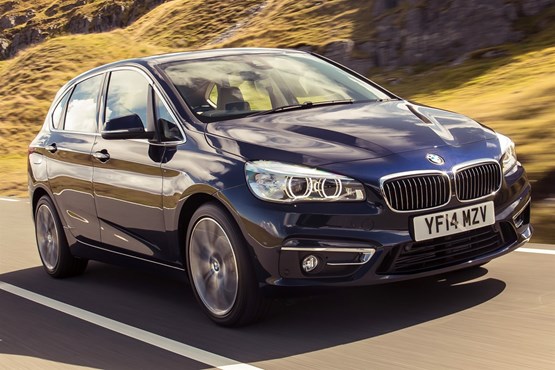 The arrival of the 2 Series Active Tourer is as mould-breaking for BMW as its i3 electric car, launched earlier this year. While the i3 is far more technologically advanced, the 2 Series Active Tourer is the first car in decades to depart from the BMW brand’s association with rear-wheel drive and longitudinally mounted engines. It is also the premium brand’s first people-carrier.

Until this month, I had never heard a BMW executive talk proudly about a new model’s cup holders, storage bins or sliding rear seat. But now those car buyers concerned with such things, who may have had a Renault Scenic or a Volkswagen Golf SV on their consideration list, have a compelling reason to visit their local BMW showroom. With a PCP finance offer starting at about £300 a month and strong residual values, this model range, which starts at £21,345, could pinch custom from the mainstream brands as well as its premium rival, the Mercedes-Benz B-Class.

BMW product manager Alex Morgan said the crucial target customers for the 2 Series Active Tourer include ‘empty nesters’, who desire a premium car that can transport their grandchildren. This customer bracket values aspects such as comfort and practicality.

Small families are another key market to capture and Morgan suggested a smaller target could be independent professionals, such as photographers, who need space for their kit.

Marketing is already under way, with a heavy experiential focus. “We can’t rely on people coming into the dealership. We have to put the car in front of people,” Morgan said.

In August, the car was displayed at high-footfall English Heritage properties, while at Camp Bestival, the family-orientated festival in Dorset, it featured in a BMW picnic area. A test-drive initiative was also conducted at Longleat Safari Park and BMW dealers have been displaying at county shows. A digital campaign may be followed by TV exposure later. Demonstrators are already going out to fleet and leasing companies.

BMW UK has relatively modest sales expectations – about 5,000 units annually, split equally between private buyers and company car drivers – because this is unknown territory for the brand.

“There is probably much more potential for this car, but because it is new to us we are being quite conservative,” Morgan said. He hopes three-quarters of sales will be bringing new customers into the BMW brand.

This month’s launch line-up comprises two powertrain variants: the 218i turbocharged three-cylinder 1.5-litre petrol and the 218d 2.0-litre turbodiesel. Both drive superbly, with plenty of overtaking power available, although the steering response lacks the immediacy and directness enjoyed by most BMWs. The 218d will appeal to company car drivers thanks to its 109g/km CO2 emissions and 68.9mpg efficiency.

From November, more variants will join the range: 220i and 225i petrol units and 216d and 220d units, with all-wheel drive available for the highest-powered models.

Compared with established rivals such as the Renault Scénic and Ford C-Max, the 2 Series Active Tourer feels slightly lacking in absolute practicality and comfort. But the BMW badge and its crucial premium quality mean many buyers will forgive that.

If you’re in the market for an MPV because space and practicality are paramount, then there are better choices. The Citroën C4 Picasso is bigger inside, quite a bit more versatile, and cheaper. It’s also worth bearing in mind that the Golf SV is equally spacious, even sharper to drive with a more flexible engine, and is cheaper. It also comes similarly well equipped to the BMW, although the boot in the 2 Series is better designed than in the SV – and easier to manhandle into different configurations.

However, if you just need more space than a family hatchback and want an MPV that remains good to drive, is refined and cheap to run, the Active Tourer is definitely worth considering.

Good first attempt at a front-drive BMW that ticks most of the boxes for buyers in this sector, while not actually doing anything better than the non-premium alternatives.