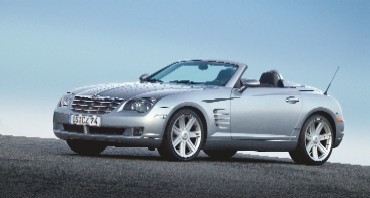 We’re a funny old bunch, us Brits. Despite the fact we only get a few weeks worth of sunshine each year we do love our convertibles and the market continues to grow – increasing 32% to over 50,000 registrations from January to May 2004.

So a Roadster version of the Chrysler Crossfire is hardly the most unexpected car of the year and coming only seven months after the launch of the hard top version, it’s clear the US manufacturer is aiming to take advantage of the current trend towards soft tops.

The Roadster was developed alongside the coupe version and apart from extra bodyshell stiffening, is pretty similar to the coupe – and that’s not a bad thing. The handling is distinctly un-convertible-esque thanks to the tight suspension and precise steering, while there is plenty of grip even in the wet.

The roadster shares the same engine and gearbox options as the coupe, (which made its debut at Geneva in 2002 and which went on sale here in November last year). So, there’s still just one engine – the 218bhp 3.2-litre V6 borrowed from Mercedes-Benz – and two transmissions, the much maligned six-speed manual and the five-speed automatic. But while the auto box may be the choice of most, the manual has come on leaps and bounds and is recomm-ended if you want to get the most from the engine.

With the roof Chrysler has opted for an electronic folding fabric affair, rather than a coupe convertible style retractable hard top.

The benefit of this is weight only increases by 36kg over the coupe and there is still some semblance of boot space left. The drawback is quite a lot of wind noise in the cabin due to the absence of any rooflining.

But then this is a convertible and minor niggles such as this won’t put off potential buyers. Chrysler is aiming to sell 2,000 Crossfires in 2004 – and more than 70% of them are likely to be roadsters.

It’s certainly helping to bring new customers to the marque – at the end of March Chrysler Group passed the 150,000 units milestone for the first time in its 11 years in the UK and is looking forward to another record sales year.