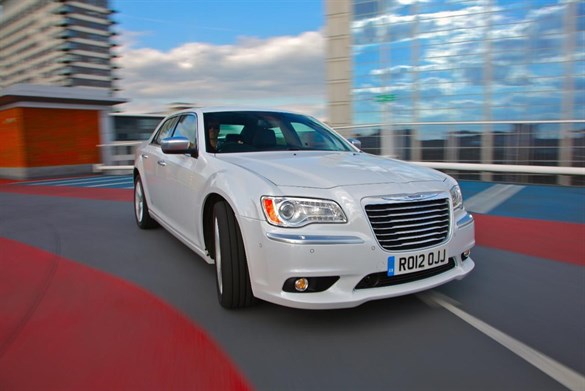 Though it gets added showroom appeal from smoother styling, significant upgrading and greater technical sophistication, the US manufacturer’s next-generation mid-size saloon is restricted to only three-litre diesel power for the UK market.

“We’re well aware that not having the car in two-litre form effectively closes off most of a sales area that represents 70,000 annual registrations and means we will have to concentrate our efforts on just 16% of the segment.

“However, we believe a vehicle that tips the scales at 2,100kg really does need the power that only a bigger motor can provide,” said Chrysler UK senior product manager Steve Mirfin.

Backed by a lavish specification and keen pricing, the two-model range is expected to be accounting for 1% of E-segment business in 12 months time by achieving 450 sales this year and 750 next year.

“When equipment levels are taken into consideration, our car is between nine and 20% cheaper than its rivals. We’re confident of success, even though our ambitions are conservative because times continue to be difficult,” added Mirfin.

Re-launched after an absence of 18 months, the chunky 300C retains the boldness of its predecessor, but slightly restrained styling makes it less macho in appearance.

Revised suspension gives it more nimble road manners to match and, aided by the latest Fiat multijet technology, the car’s new engine provides effortless surges of power. Despite that, it is more efficient and quieter than the previous diesel motor and produces refined travel via a smooth-shifting auto transmission.

Both Limited and Executive versions lack little by way of equipment, but have minimum switchgear on show thanks to a sophisticated infotainment system that operates all manner of gadgets – including a clever feature that changes the direction of the headlamp beams to match country requirements.

Park assist and a rear camera system also come as standard on both versions, along with a powered rear sunshade and front seats that can be ventilated as well as heated, and as well as standing on even larger wheels, the Executive boasts the biggest dual-pane sunroof in the sector, extra leather trim, paddle gear levers on the steering wheel and adaptive cruise control.

As a result, it offers remarkable convenience to go with the more upmarket demeanour that Chrysler believes makes it a credible alternative to premium German models.

What your customers have been told about the 300C

The 300C’s combination of a rear-drive chassis without a premium badge means that you’ll struggle to find any direct rivals. It offers the space of an Audi A8 for the price of an A6, a recipe with an unarguable appeal for
those looking for a big, unpretentious saloon.

The Chrysler 300C is a fine long-distance cruiser, plus it has a competitive £35,995 starting price and you get a lot of equipment for your money. It still makes little sense as a company car because CO2 emissions of 185g/km (191g/km with the larger, 20-inch wheels) place it in a much higher tax band than most rivals. However, if you’re a private buyer who fancies a large, left-field saloon, the 300C has a lot going for it.

The Chrysler 300C remains a genuinely interesting car. It looks great and should be well priced. One to try before you buy a nondescript German.

Chrysler aims to make an impression on the small car market with the Ypsilon.