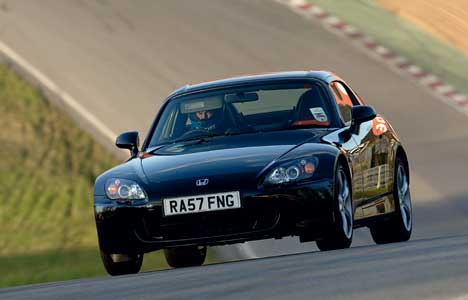 Honda got the basic ingredients for the S2000 right first time.

With only subtle styling changes it still looks as striking now as it did at launch in 1999, and the 2.0-litre VTEC engine pushes out more power per litre than any other naturally-aspirated powerplant sold in the UK.

So it’s no surprise that Honda’s engineers have left both alone, focusing instead on making it a more manageable and involving driver’s car.

Unleash the S2000 on a race track or winding country road and the changes really comes to life, its agility and grip willing the driver to push harder as the VTEC screams towards its 9,000rpm rev limit.

The car is now sharper, more communicative and, ultimately, more fun, but it hasn’t lost none of the exhilarating driver experience its fans love.

Inside, the seats are firm and supportive and the driving position almost perfect, though the steering wheel is too far away.

The digital instrument cluster is clear and modern. It’s usable too, with a large boot and fuel economy which won’t break the bank.

It’s noisy on long trips and falls into the highest tax and insurance bands.

Honda sold 563 last year, and the 2008 model will appeal to a similar small number of enthusiasts.