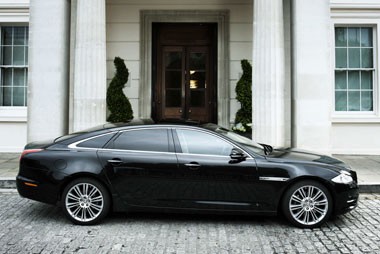 “Jaguar has succeeded in creating a bold, rakish, modern super-saloon that succeeds on every level.”

So the judges concluded in the 2011 AM Awards when selecting Jaguar’s four-door flagship as winner of the Car of the Year.

The new XJ is the most radical step in redesign of the car since the 1960s and together with a totally new look is bursting with luxury and technology to suit the whims of the most discerning executive.

An instrument panel dominated by digital dials, a ‘dual-view’ eight-inch touchscreen can show DVDs or television (£500 optional extra) to passengers while the driver uses the sat nav; sound is provided by a 1,200 watt Bowers & Wilkins system, plus hard-disc drive for music storage, DAB radio (£250 optional extra), two USB ports, Bluetooth and inputs for iPods and laptops are among the wizardry.

The advantages of the diesel are obvious.

The 0-62mph figure is achieved in a highly refined and unflustered 6.4 seconds.

Just because you can afford the hefty price tag – or your company is willing to put out for one – doesn’t mean you don’t want to spend the money keeping it on the road wisely.

So, the official combined mpg figure of 39.2 is compelling – on our week’s road test we were achieving 36.

Aiding this is aluminium body construction, which makes the XJ around 150kg lighter than its rivals.

It also uses around 50% recycled material creating a saving of three tonnes of CO2 per vehicle compared to a new aluminium bodyshell.