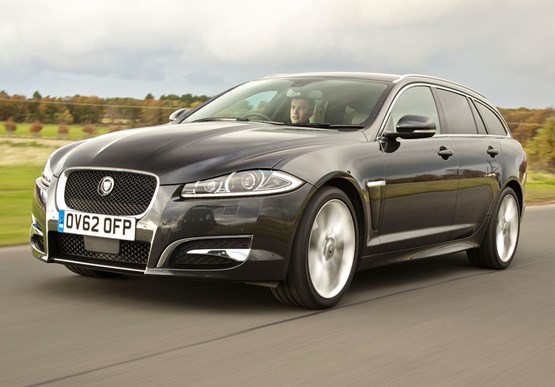 While the F-Type encapsulates all of Jaguar’s brand values in a sexy package, the XF Sportbrake operates at the other end of the spectrum by helping dealers compete in a key segment with German competitors.

Dealers had been without an estate to offer customers since production of the X-Type finished in 2009 and the introduction of the XF Sportbrake last year means the network can still offer Jaguar’s trademark luxury touches with the added practicality of more room.

XF Sportbrake customers get 1,675 litres of boot space with the rear seats down and 500 litres with the 60/40 split seats in place, which is competitive against the Audi A6 Avant and BMW 5 Series Touring.

This extra space comes at a £2,000 premium over the saloon XF. Dealers can also offer extras like a roof rack or tow bar for those looking to turn their Jaguar into a complete lifestyle workhorse.

Step inside the XF Sportbrake cabin and it is extremely comfortable, but while the design does have personality, some of the touchscreen technology and graphics are starting to look a little bit dated.

The XF Sportbrake’s main draw is being a choice outside the norm. Audi and BMW’s exposure to fleet does mean that owning one doesn’t make you stand out from the crowd, whereas the XF is more exclusive.

“Jaguar has succeeded in creating a bold, rakish, modern super-saloon that succeeds on every level.”