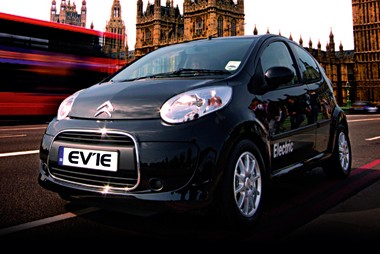 Experienced drivers should adapt quickly to the all-electric Citroën 1 Evie, though others may have some difficulty. It is the car’s simplicity that can cause confusion.

The Evie has a stick instead of a gear lever. The driver pushes it forward to move in that direction, and back for reverse. There is no neutral because the Evie does not have a gearbox.

After the key is turned in the steering column, and the handbrake released, the Evie moves away at a speed dictated by pressure on the throttle pedal.

Acceleration is smooth and seamless as there are no transmission ratios, and progress from stationary to 40mph is swift.

A virtue of the Evie is that the electric motor acts as a brake as soon as the foot is taken off the accelerator. From 40mph, only light pressure on the brake pedal is needed to bring the car to a halt.

A downside of the electric Mini under trial by BMW Group is that it’s a two-seater – batteries fill the rear passenger space – but the Evie has the same cabin space as a fossil-fuelled C1.

Along a short test route in central London, the Evie was perky enough to command its place in busy traffic.

The claimed top speed (untested) is 60mph and the driving experience should be relaxed for the maximum distance of 60 to 70 miles before the Evie needs to have its batteries fully recharged.

That takes six to seven hours connected to a 13-amp socket, the cost given as around 90p, the key appeal of the zero-emission Evie.

The Electric Car Company, which converts C1s supplied by Citroen, aims to sell 500 this year and ramp up sales to between 2,000 and 4,000 in 2010. ECC claims it could save London-based owners £7,000 annually in fuel and parking savings.

Autocar
The electric-car compromise is still there; the Evie is much more expensive to buy and lacks the performance and range of a petrol-powered city car, but the market for all-electric city cars is growing.

Newcarnet.co.uk
The Evie could look expensive, but it seems like an absolute bargain when compared to the Lithium-ion version of the G-Wiz which is smaller and has never been near a crash-test.