Despite the unpredictable weather, convertibles remain popular with motorists in the UK. And once a buyer has chosen a soft-top, they tend to stick with them. It’s as much about status as it is the desire for open top motoring.

Currently it’s the three German marques, Audi, BMW and Mercedes-Benz, plus Saab that are fighting it out for top spot and Audi has followed up the new A4 saloon launch earlier this year with a revised convertible version as it looks to head the list.

This features the single-frame grille which is now the family face of Audi along with newly styled rear lights while the interior remains fairly unmolested. The main changes are in the engine line-up, with three new units available in the soft top. 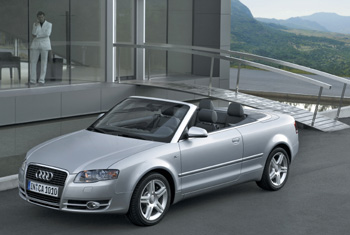 Audi has also paid attention to the hood. A new acoustic roof, standard on the S4 and an option on the rest of the range, uses new denser fabrics that reduce noise levels.

Once behind the wheel, it’s difficult to distinguish this new version from its predecessor, but that’s not a bad thing – it’s a testament to the quality and handling.

The steering is a touch more precise and there is noticeably more feedback, while the chassis has been revised to improve ride comfort.

The S4 is the M3 convertible rival and with a 4.2-litre engine it’s a bit of a beast. The engine note is superb but it can feel less responsive than the free-revving 3.2-litre.

That said, it’s definitely AM’s pick of the range.