One national car magazine called it “the most important car for 30 years”. Not surprisingly that’s a quote BMW has enthusiastically adopted for the launch of its 1-series. Motoring hacks do enjoy hyperbole, but for BMW and its dealers, there’s no doubt the 1-series is a Very Important Car.

Let’s get straight to the point – the 1-series is a winner. Sculptured and conspicuous – and better looking in the metal than in photos – it beats most competitors in ride and handling, and gives retailers a whole new set of buyers to target. BMW is incentivising them to achieve 70% conquest sales for the model, which is scheduled to sell 5,500 this year and 17,000 in 2005.

First the disappointment: the 2.0-litre petrol does not live up to BMW’s high standards. It fails to excite, suffers from a real lack of urgency and belies its 0-62mph paper figure of 8.7s with a stodgy mid-range. It’s no surprise that it will account for just 5% of sales.

Jump into the 163bhp 2.0-litre diesel, however, and what a contrast. Effectively the performance engine in the range, it offers a punchy drive, excellent pulling in every gear and effortless driving. But it’s not the pick of the bunch: that goes to the 122bhp version. Slower to 62mph, yes, but at overtaking speeds, the 41-point dip in bhp is barely noticeable, although it does get a bit reathless at (very) high speeds. BMW says this engine will account for 25% of the range (the 2.0 diesel 30%), but we’d expect more people to plump for the cheaper option.

The 1.6-litre petrol is a gusty unit that will show most of its rivals a clear pair of heels and will attract interest from high spec 1.8-litre Focus drivers.

A 1.8 petrol goes on sale in early 2005. Speculation is rife of an M version, and we expect a 200bhp-plus 2.5-litre within 12 months to compete with its rivals’ performance cars. 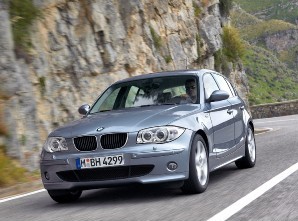