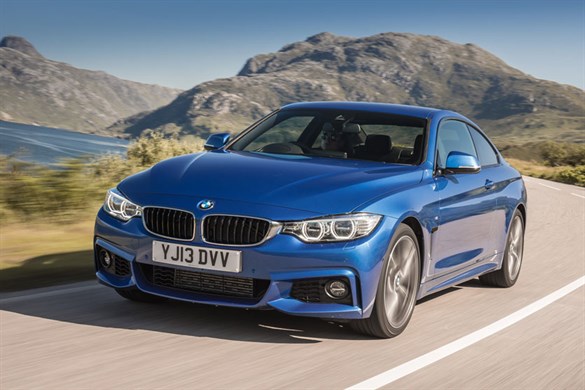 BMW’s 3 Series Coupé and Convertible are no more after three generations. In their place comes the 4 Series, which BMW says will reflect the fact it is a fresh design in its own right, not a 3 Series with fewer doors and a lower roofline.

On sale from this month, the 4 Series is longer and lower than the 3 Series Coupé it replaces. It also provides extensive equipment upgrades over its predecessor. BMW is confident it will sell about 9,000 4 Series Coupés in its first full year, which looks like being its most successful performance since 2008, when it sold 11,098 3 Series Coupes.

Customers wanting more can up-spec from SE trim to Sport or Modern for £1,500, Luxury for £2,500 or M Sport for £3,000, so it’s a simple step-up for BMW salespeople to manage. Sport and Modern involve largely stylistic changes and 18in alloys, while Luxury adds sat-nav, telematics and BMW’s emergency call system. M Sport gets a bodykit and upgraded suspension and brakes.

Gearbox options include a six-speed manual or eight-speed automatic with a launch control function and paddle-shifters.

From November, the range will expand, with the addition of a lower-powered 2.0-litre petrol engine and two 3.0-litre turbodiesels. xDrive all-wheel drive is standard on certain models.

All models feature start-stop and, crucially for BIK-conscious company car users, have CO2 emissions as low as 121g/km.

With a wider track and longer wheelbase than the 3 Series, 50:50 weight distribution and the lowest centre of gravity of any current BMW, the 4 Series has been well positioned to provide a dynamic driving experience. It doesn’t fail. And remarkably it still delivers the efficiency that so many potential customers now expect.

What’s been said about the BMW 4 Series Coupé

The 4 Series carries a premium of just over £3,000 over the 3 Series, but this isn’t excessive given the extra style and equipment it offers. The 4 Series is also priced in line with the rival Audi A5 and Mercedes C-Class Coupé, and is better to drive than both. If you’re after a classy, four-seat coupé, the 4 Series is definitely worth considering.

It is clearly a more appealing car than the old 3 Series coupé – and ultimately better handling and more rounded, too. It will appeal equally to enthusiasts and those simply in the market for something touting a fair portion of exclusivity and bragging rights.

Despite the marketing obfuscation, the 4 Series is a great car to drive, although tyre choice is crucial. The rear seats are cramped, however, and it costs at least £3,000 more than the regular 3 Series. Beware the options list, too.