In comparison, the Vauxhall Vectra sold almost 51,000, despite nearing the end of its lifecycle.

Not surprisingly, Citroën expects sales of the new C5 to “significantly increase”, although it is coy about exact figures. However 70% of those sales will be to fleets.

In anticipation of this, C5 now has a conventional suspension, which Citroën says is, “more or less, designed for fleet”. Its Hydractive 3 Plus self-levelling suspension is still offered.

The C5 is already courting controversy due to the UK ad campaign. With the tagline “Unmistakeably German.

Made in France”, 10 MPs complained about its imagery, symbolism and style reminiscent of the 1930s. 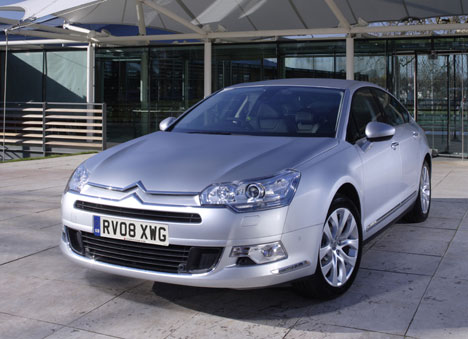 They could’ve also complained about the unconventional spelling of the word unmistakably.

Marc Raven, Citroën communications director, said: “The ad is witty and clever. We really hope it will get people talking about us like they haven’t done before.”

Quality levels have taken a big leap forward and dealers are excited about the C5’s prospects.

Target buyers are professional, independent thinkers aged between 30 and 50. They are likely to be married with older children and have a second car in the household.

CAP’s residual values are up 36% on the outgoing model and, against nine rivals, second only to the Volkswagen Passat.

Along with low maintenance, the C5 is being positioned as the perfect fleet vehicle.

Automatic options are available on both 2.0-litre models and the 2.7 V6.

The entry-level model, SX, has ESP and traction control, seven airbags and electrically adjustable and heated door mirrors as standard.

Mid-range is VTR+ and top range is Exclusive, which includes acoustic laminated side windows and interior mood lighting.

The C5 2.0 HDi VTR+ is expected to be the most popular model.

Citroën is taking the C5 out to the public, for example at county shows. “Well over a million people will get to see it.

The car is a huge move forward for us,” says Raven.

The C5 Tourer, an estate, will première at the London Motor Show in July and is expected to take 40% of overall C5 sales.

The C5 really impresses both in looks and driving ability.

Even the 1.6 HDi was a pleasure to drive despite being a small engine for a car this big.

The interior on lower-specification models felt cosy and welcoming and the high-specification Exclusive was definitely up there with the German marques.

The central console was complicated-looking as were the dials, and the brushed silver in the lower spec is likely to scratch easily.

But there isn’t an awful lot to complain about.

Legroom is plentiful, while a nearly-flat floor gives lots of luggage space.

Buyers can even get a back massage from the driver’s seat as an additional option.

The C5 handled well on rural and urban roads.

But the real problem still remains the badge.

From any view but the one in which I see the Citroën badge, this really is a very desirable car.