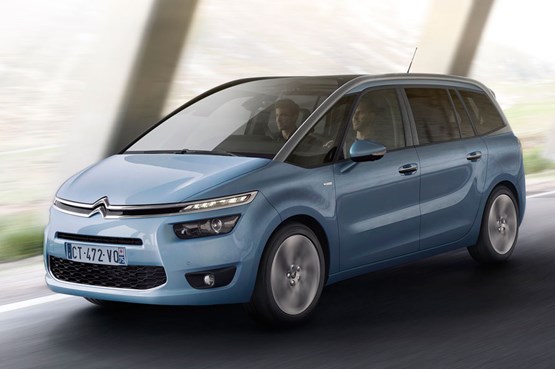 With a premium-like market position and seats for seven adults, the Citroën Grand C4 Picasso people carrier is expected to outsell its five-seat little sister by more than two to one next year after it launches in the UK in January.

This MPV provides more room for occupants than Citroën’s current seven-seater and has equipment levels that more than suit the family-orientated company car users and Motability recipients whom Citroën has in its sights.

The fleet sector is expected to account for 75% of its 14,000 full-year sales. Yet Citroën wants to tempt some private buyers, too. It said trends show retired people are increasingly in the market for MPVs, as many are more heavily involved with caring for grandchildren and have higher disposable income.

At the media launch ahead of the Grand C4 Picasso’s arrival in  showrooms, the model expected to have highest demand – the 115bhp turbodiesel in second-grade VTR+ trim - wasn’t available.

Instead, we were only able to review the range-topping 150bhp BlueHDI model with its efficient two-litre diesel emitting 110g/km CO2. It’s a superb flagship MPV, which in the high-level Exclusive trim comes with a 7in touchscreen for the sat-nav and audio controls, plus a second 12in HD screen which can be configured to show speed, trip computer details and further infotainment details, including a personal photo.

Other standard equipment at this level includes an electric tailgate, LED lights, alloy wheels and dual zone air-con. With fitted options such as 360-degree parking camera, active cruise control, a panoramic roof and motorised footrest for the front seat passenger, the car I drove was a technical showcase and certainly created a premium perception, as could only be expected by any customer signing for a near £30,000 car.

It’ll live up to a family’s expectations, too. All seven seats are truly usable and comfortable, with access to the rear gained by a neat folding mechanism, and there’s still space behind the third row for a child’s buggy or several shopping bags.

Citroën UK managing director Linda Jackson said quality models such as this MPV and the forthcoming C-Cactus crossover model will help to raise further Citroën’s brand perception. I can only agree.

What’s been said about the Citroën Grand C4 Picasso

AUTO CAR
There are sharper cars to drive in the class, but its good-looking and airy interior, flexible seating arrangements and vast amounts of space tick the boxes of what buyers in this segment are looking for.

AUTO TRADER
The new Citroën Grand C4 Picasso is actually a stylish, efficient, versatile and easy-to-drive car with plenty going for it.