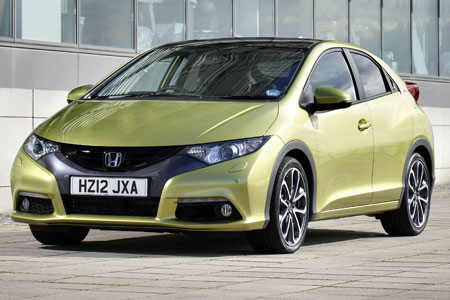 The new Honda Civic marks a new determination by the company to win back business in the UK it might have lost through losing focus on the important corporate sales market.

And according to its new head of corporate sales, Ed Hummel, Honda’s dealer network will play an increasing role in bringing customers back to the brand and keeping them.

Hummel said: “We have 180 dealers and of those 37 are corporate specialists.

"But we have 10 ‘premier’ dealers which are the most capable of dealing with the volume of cars fleets use, have the infrastructure and able to deliver the level of satisfaction expected.

"We are trying to introduce leasing companies to these dealers to promote their expertise at handling fleet SMR work.”

The diesel version of the Civic was discontinued at the end of 2010, although its low-CO2 credentials were supported by the Insight and Jazz hybrid.

But things are looking up. An all-new Civic is about to be launched with first registrations expected in March.

The big news is, it not only has a diesel – it has one with class-leading low CO2 emissions.

The 150bhp i-DTEC engine, which has seen service in the Accord and CR-V over the last few years, has been fettled in the new Civic to achieve 110g/km and 67.3mpg on the combined cycle.

The 1.8-litre petrol engine has CO2 emissions from 137g/km (although even in the highest equipment grade and with automatic transmission tops out at 150g/km), while the 100bhp 1.4-litre achieves 129g/km.

The significant CO2 reductions are made possible not just through improved engine and transmission technology, but also aerodynamics, (including a shutter grille on the diesel) and idling
stop-start.

The styling of this Civic looks more of an evolution of the previous model rather than being all new.

Although the rear window is still split, a wiper has been installed on the top pane, while the lower pane has a heating element to clear frost or condensation.

It has also been positioned much lower than in the previous Civic to improve visibility.

Inside the Civic is still one of the roomiest cars in its class, while it feels more upmarket than its predecessor with a soft-touch dashboard and door panels.

In cars fitted with sat-nav, the current Honda system is carried over and sits in the dashboard centre, but an extra screen sits higher up near the base of the windscreen.

When it isn’t showing sat-nav instructions, it displays trip computer information or can show an image uploaded via USB.

The 150bhp diesel offers strong performance, but is amazingly quiet at steady speeds.

Ride comfort is also much improved, dealing with poor road surfaces in a much more composed manner than the previous Civic, while the seats are also offer better support.

The Civic is a major improvement over the outgoing model, while fleet appetite will be whetted further by the recent announcement of a 120bhp 1.6-litre diesel promising CO2 at 95g/km.