Hyundai believes that its new Santa Fe is capable of progressing into the territory occupied by premium SUVs such as the ubiquitous BMW X5, Land Rover Discovery and Volvo XC90.

It’s pretty fair to say that it still has some way to go before it can start to be a true rival at that level, but it is definitely moving up the ladder.

The Korean manufacturer has spent £155m on the development of the model, which it claims marks a pivotal moment in its efforts to become recognized as a manufacturer of 'high quality, desirable cars at an accessible price'.

In terms of size, the design of the new model certainly puts it alongside the upmarket competition and makes the step-up from the Tucson more obvious. Korean and Japanese manufacturer’s love to promote the ‘European’ styling of their new models and this is definitely a point in case.

It’s much sharper and bolder than the old version, and with a prominent grille and raked headlights has an unfussy look.

At 4.6 metres long it’s a more substantial looking vehicle than its predecessor, and is also taller and wider with a longer wheelbase. This growth spurt allows Hyundai to play its trump card.

Because the Santa Fe comes as a seven seater – and at just £600 more than the five seater – it instantly becomes a much more attractive proposition.

Natural rivals the Kia Sorento and SsangYong Kyron are both five seaters and while the Volvo XC90 has seven seats as standard, it starts at £31,635 – a difference of more than £10,000.

The third row of seats folds flat into the floor, providing a completely level rear load space if needed. It’s a simple system that takes a few seconds and, thankfully, doesn’t involve any back straining or finger grazing.

The interior finish has been vastly improved with the use of better quality leather and plastics, although the Korean penchant for fake wood still persists. The switchgear and steering wheel have a much more tactile feel to them and the Santa Fe features Hyundai’s first integrated stereo unit – a welcome and stylish addition.

Little touches such as the blue backlighting used on the dash and centre console (although not all of it matches) also add to a more upmarket finish.

#AM_ART_SPLIT# Two engines are available but the main choice for UK buyers will be the new 148bhp 2.2-litre diesel unit, which comes with either a five-speed manual or a newly developed five-speed automatic gearbox.

It works well with either transmission, although the manual allows you to get more out of it, and is a surprisingly refined and quiet unit. It has enough torque available to make it pretty pacey at low speeds and has a good mid-range, making it an ideal vehicle for towing.

The other choice is a 2.7-litre V6 petrol unit, which has been carried over from the old Santa Fe and comes with a four-speed automatic. It’s fairly sluggish with lots of noise but not much in the way of progress. It is only expected to account for around 14% of sales in the UK and is aimed more at the US market.

The Santa Fe may be all-new but unfortunately some of the characteristics that let the old model down seem to have been carried over.

The most noticeable is the steering – it is still too light and vague, requiring more turns of the wheel than you’d expect and consequently cornering at speed is not particularly confidence inspiring.

Hyundai seems to have refrained from trying to make the Santa Fe corner like a car, which means there is a fair amount of body roll, but it grips well enough and the handling is predictable if ultimately uninspiring. 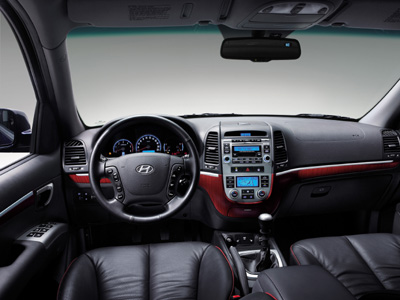 On the plus side, however, avoiding stiffer suspension means that ride is excellent, particularly on pot-holed and gravel tracks.

Engine and road noise are both much lower but, unfortunately, this just serves to highlight wind rustle around the windscreen.