Park the all-new Jeep Wrangler next to the outgoing model and you’ll be hard-pressed to tell them apart.

That’s deliberate; owners are a fiercely loyal bunch who don’t embrace change. But even they will want the 2007 model to be better on the road than the current car.

The all-new version goes on sale in the spring and has been redesigned from the ground up, with a brief to improve the on-road dynamics and refinement, while keeping that legendary off-road ability.

Slide behind the wheel and the changes are obvious; there’s a proper cabin that feels designed rather than cobbled together from spare parts. There’s electric windows, ESP and even speed-activated central locking for the first time.

It’s not overflowing with kit and there’s still no internal adjustment for the door mirrors, but all the key Wrangler features are there, including the low-range gearbox, fold-flat windscreen and removable doors.

Jeep say it’s 20% quieter in the cabin than it used to be and there is a noticeable improvement. The ride and handling are much better, too – it doesn’t wobble like a fairground bouncy castle every time you change gear or turn a corner any more.

Room in the rear is still at a premium, but if it’s space you want try the Unlimited four-door version. There’s masses of leg, shoulder and head room for passengers of all sizes, and a minimum of 1,313 litres of boot space.

The Wrangler’s over complicated folding soft-top has been simplified, but the biggest roof change is the Freedom Top, a three-piece plastic lid that comes off in sections. Both fit either car and will be available aftermarket through dealers.

Off-road, the new Wrangler is almost peerless. We drove up and down rocky 40 degree ravines and it performed faultlessly. But it’s the Tarmac performance that’s most important and dynamically the car isn’t as good as rivals such as Honda’s CR-V or the Toyota RAV4.

But Jeep knows that; the Wrangler is an off-roader not an SUV, and as a niche vehicle, UK dealers only expect to sell 1,000 units per year. That’s a lot more than they currently shift, though. 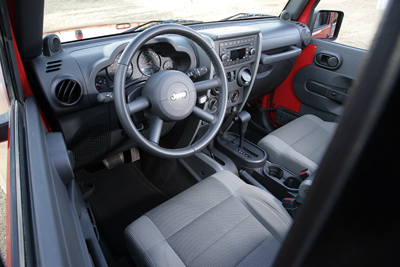 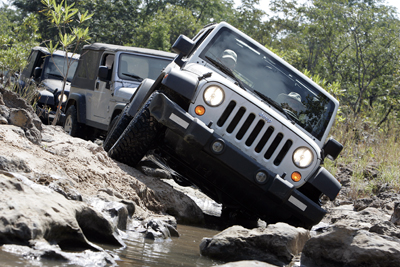