Potential sales of the Mitsubishi Grandis have been blunted by the absence of a diesel version but from September 1, UK dealers will offer the 2.0 DI-D, powered by a Volkswagen Group engine.

Around 900 diesel sales are expected by December, compared with just over 1,000 petrol models for the whole of 2005.

Mitsubishi Motors UK is optimistic about the sales scope of the diesel Grandis and managing director Jim Tyrrell regards total sales of 4,700 of the seven-seat MPVs in 2006 as a conservative estimate. Only about 700 of those are likely to use Mitsubishi’s 2.4-litre petrol engine.

The quoted combined fuel consumption figure of 43mpg for the diesel is the key statistic for sales growth.

Nearly two years ago, Mitsubishi Motors Corporation signed a long-term agreement with Volkswagen for the supply of diesel engines, which will also be fitted to other models. About 85% of large MPVs sold in the UK and Europe are diesel-powered.

At the press launch of the diesel Grandis in Germany, the emphasis was on its performance (0-62mph takes less than 11 seconds). Mitsubishi Motors Europe says that the sleek lines of Grandis attract drivers who would not look twice at an MPV with a ‘school run’ image.

VW’s diesel engine is mated to a six-speed manual transmission produced in Japan, where all versions of Grandis are assembled. No automatic is available on the diesel and the only option is metallic paint (£300).

Large, but lower than some rivals, Grandis has style plus practicality. The rear seats can be folded into the floor and Mitsubishi calls this feature ‘Hide and Seat’.

In 1983, Mitsubishi was one of the first manufacturers to enter the MPV market when it launched the Space Wagon (very much a ‘school run’ MPV). Jim Tyrrell believes the continuing criticism of SUVs in some quarters is dampening demand in the UK while the MPV segment will continue to grow.

He expects 35% of Grandis buyers in the first year to select the entry-level Classic and 49% the range-topping Warrior, which has an 8in DVD and 18in alloy wheels. These versions, plus the Equippe and Elegance, will all be available from September.

Tyrrell is confident of strong residuals on all versions of the diesel Grandis, which has 17in alloys, single MP3-compatible CD player, aircon, and leather-trimmed steering wheel and gear shift as standard. ABS, EBD and front, side and curtain (first two rows of seats) airbags are fitted across the Grandis range. 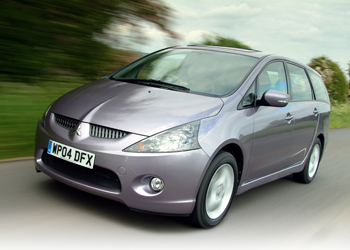