The stakes are high for Mitsubishi’s new L200. The old model was ousted from first place in the pick-up sales charts in the second half of 2005 by the Nissan Navara. Mitsubishi says the new L200 is its most important launch ever.

The L200 went on sale March 1 with Mitsubishi expecting to register 3,000 units by the end of the month. Dealers took 2,547 orders before the first models were even through their showroom doors.

Like its predecessors, the new L200 is an accomplished beast of burden. Mitsubishi has developed an all-new Euro IV-compliant 2.5-litre common-rail turbo diesel, which develops 17% more horsepower (now 134bhp) and 30% more torque (231lb ft) than the outgoing model. This is allied to a 26% improvement in fuel economy, with 32.8mpg returned by manuals on the combined cycle.

It’s a familiar line-up: the 4Work, 4Life, Warrior and Animal specifications are well known to existing customers; the only addition is the luxuriously appointed automatic-only Elegance.

The range starts with the single cab 4Work model, complete with no-nonsense steel wheels (£14,392 inc VAT). And at the other end of the spectrum, the fully-loaded double cab Elegance at £23,498 buys leather seats, sat-nav and an automatic box.

Cost of ownership has improved. Service intervals have risen from 9,000 miles to 12,500 miles and all vehicles are covered by a comprehensive three-year/100,000 mile mechanical and 12 year anti-corrosion warranty, plus three-year pan-European breakdown cover.

Sector competition has grown massively since the L200 first hit the forecourts. The likes of the Nissan Navara have upped the game significantly, but Mitsubishi’s offering is more than a match. The new L200’s off-road capability is staggering. With flexibility a must for the majority of buyers, the L200 offers terrain-conquering prowess few can exceed. It’s on-road manners are also impressive.

Although some of the vehicle’s underpinnings are a little crude (leafspring suspension and drum brakes can both be found at the rear), the pick-up’s on-road performance is more than adequate for all but the most ardent commuter.

A best-in-class turning circle is a bonus for real-world driving, as is the host of electronics to aid safety and stability.

The anti-lock braking (ABS) and electronic brake distribution (EBD) system adjusts when carrying heavy loads in order to maximize braking performance. But the real jewel in the safety crown is the active stability and traction control system (M-ASTC). Hugely increasing both cornering stability and traction, the result is a vehicle capable of abrupt changes in direction and speed around corners that leave you amazed.

Combining rugged ability and retail-friendly accessories, the new L200 looks set to carry on the good name of its predecessor. 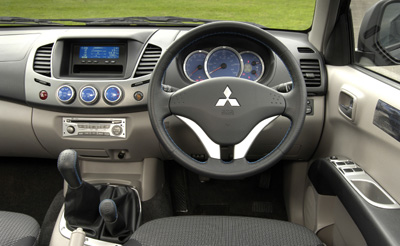