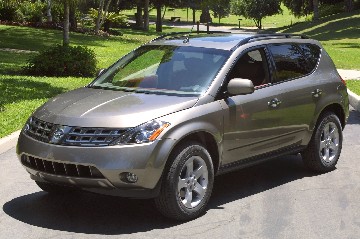 If there were a prize for most improved carmaker of the 21st century, Nissan would be going up on stage to get the trophy. Good product is what the Carlos Ghosn-led Nissan has pumped out. Think Micra, think X-Trail – and most of all think 350Z.

The latest is the Murano, which seeks to establish yet another cranny in the multi-niche 4x4 market when it goes on sale early next year.

Murano is a five-seat ‘crossover’ that’s more car-like than most SUVs to drive, semi-sporty, and yet still spacious, versatile and able to cut through the mud, if absolutely necessary.

Like all new-breed Nissans, it is an extraordinary looking vehicle: modern, edgy, swoopy, and with just a touch of the sci-fi and Tokyo-by-night about its lines. The nose is a chunky chromed cheese grater grille, aggressively raked, and flanked by stacked vertical headlights (again, think 350Z).

The tail has a rounded Micra-ness, including dainty corner tail-lights. The flanks have distinct yet curvy shoulders, and a rounded, raked glasshouse.

The dash is modern and techy: main instruments are in an alloy-effect pod. The glazing is quite shallow, and you sit low for a 4x4. You wear this SUV: it’s more all-wheel-drive sportster than lofty Land Rover. Rear three-quarter visibility, with the wraparound tail and thick rear pillars, offers more of a peek than a panorama.

The back seat is spacious – both for head- and legroom – and the boot is a decent size too, never mind the raked and rounded tailgate which is better for style than stowage.

Equipment levels will be generous for Europe.

The only downside is that the Murano is not the best of the SUVs currently offered by Nissan in North America. For just a little bit more, you can get the Infiniti FX, and that is one of the most entertaining and eye-catching SUVs of all time. But there are no plans to bring it to Europe, sadly.

Never mind; the Murano will suffice. Within two years, Nissan will have seven 4x4s in the UK. European SUV market leadership is possible. Given Nissan’s recent record, you wouldn’t bet against it.

The Murano rides on a saloon platform and uses saloon-like front struts and rear multi-link independent suspension. Engine is a detuned 350Z 3.5-litre V6. It’s a sweet, gutsy unit, and is matched to a smooth CVT auto ’box. For DIYers, there is a Tiptronic manual shift, where six pre-set stepped ratios are chosen from the CVT’s armoury.

The 4x4 system is the set-up used on the X-Trail: it’s front-drive until things get slippery when the rear wheels boost traction. A switch can lock 4x4 in place, if things get tough. Handling is neat and flat, and much better than most 4x4s, and the ride is okay, if just a little stiff-kneed in the Japanese tradition. Damper mods are promised for Europe, so expect some improvement over the US version tested.