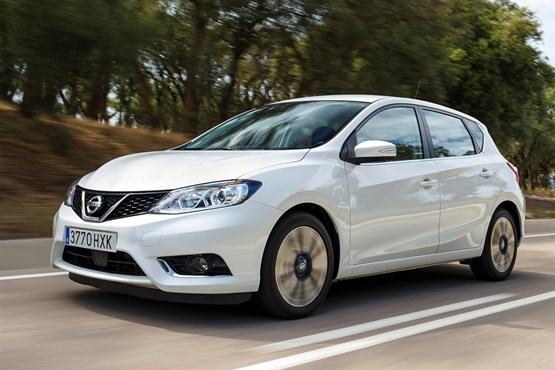 After a seven-year absence from the hatchback segment, Nissan is back with the Pulsar.

Despite the recent crossover boom, the hatchback market is the second-largest in the UK. And although Nissan has loosely been known as ‘the crossover brand’ for a number of years, it plans to use the Pulsar’s increased quality and refinement to compete in the C-segment again.

The addition of the Pulsar means Nissan can now offer a more complete range and the carmaker expects the model to pull customers from the Almera, a model which was discontinued in 2006. It predicts first-year registrations of about 10,000 – 40% retail and 60% fleet. Within the first three years, it is anticipated that two-thirds of sales will come from conquest.

Nissan Motor GB managing director Jim Wright said: “Doors have been closed to us in the past because of our lack of a hatchback model and a lack of a traditional line-up.

“The Pulsar was much needed to complete the range.”

The model was designed and engineered specifically for the European market and is built in Barcelona.

There are two engine options currently available – the 1.2-litre DIG-T 113bhp six-gear petrol variant and the 1.5-litre dCi 108bhp diesel option, with a combined efficiency of 78.5mpg and CO2 emissions of 94g/km, available at an extra cost of £1,600. Both variants are available with Xtronic transmission for an additional £1,350.

More options are in the pipeline. Nissan revealed at this years’ Paris Motor Show that a Nismo version is coming, together with a 1.6-litre DIG-T 187bhp petrol engine.

Featuring the longest wheelbase in its class, 50mm more than the Hyundai i30, means rear legroom is impressive.

Pre-Pulsar market coverage by Nissan was 45.2%, rising to 67.9% by jumping back into the hatchback market.

Category manager for crossovers at Nissan Motor GB, Kieran McMenamin, said: “The Pulsar will be in a strong position in the market with a lot of tech offered as standard, for a price that is very competitive. The Pulsar completes our range as a whole, but also brings Nissan in-line with competitors.”

What’s been said about the Nissan Pulsar

The Pulsar is quiet and smooth, making it one of the most relaxed hatchbacks around. There’s little in the way of sparkle from behind the wheel, but it’s very comfortable, with superb ride quality. It also has acres of rear legroom – more than larger saloons like the BMW 3 Series.

Although the Pulsar is far from entertaining to drive, its refinement and space are sure to mean it deserves more credit among its talented rivals than the long-forgotten Almera ever mustered.

The old X-Trail had a dedicated following, but Nissan is targeting families as well as 4x4 diehards with its new version