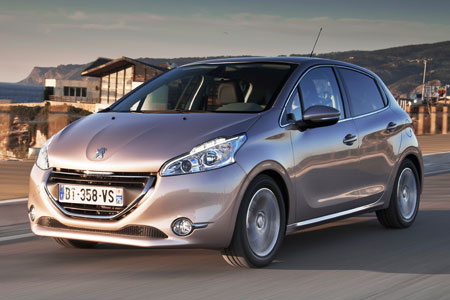 Peugeot’s fortunes in the B- segment reflect just how quickly customer sentiment can shift when a manufacturer takes its eye off the ball.

The French brand had a segment leader with the 206, but admitted the 207 had failed to meet its expectations because “it was priced too highly, it was too big and styled too aggressively”.

Peugeot wants to recapture a market leading position from the Ford Fiesta in the UK and it believes it will get there by attracting female buyers that loved the 206 back to the brand and pricing it competitively enough to win sales from customers that have a smaller second car.

Whatever happens to sales when models are delivered in the summer, the French brand has delivered on its objective to come up with a well styled model.

Designers were tasked with re-generating the 200 series, rather than evolving what has come before and features like the new floating grille, sculpted side profile and boomerang lights help to mark the 208 out as the newest interpretation of a Peugeot.

Worryingly, a straw poll in the AM office comparing the 207 and 208 side by side saw four out of five women opt for the 207.

The men, however, all preferred the 208.

The 208 is smaller and lighter than its predecessor, with 110kg of fat trimmed off and dimensions scaled down by 7cm in length.

There’s still an ample amount of headroom, as well as space for adult passengers in the back.

There are five trim levels on offer starting with Access through Access+, Active, Allure and the top of the range Feline.

The Allure trim is likely to be the most popular spec with certain aluminium style design touches that wouldn’t look out of place on Citroën DS sister-brand models.

The interior has been rethought with a smaller steering wheel, high seating position and heads up display. It takes a bit of getting used to, but after several hours behind the wheel the driving position started to feel comfortable and made more sense.

There’s a broad range of engines for customers to choose from with five petrol and five efficient diesel options.

These smaller engines will give Peugeot a sub-1.4-litre engine in this segment for the first time,
a factor that UK product manager Mark Blundell believes will be key to winning customers
from the Fiesta and Volkswagen Polo.

The 1.2-litre VTi in Allure trim was a great combination, genuinely recapturing some of that driving fun that could be had in the 205; something Peugeot has been promising on its B-segment models for years.

The larger three-cylinder is peppy scuttling around town, it’s not too noisy on the motorway. Handling is surefooted with minimal body roll.

With a starting price of £9,995, it comes in just below Polo and slightly above Fiesta.

There are now 27 competitors in the B-segment so Peugeot will have a tough fight on its hands to claw back its market share, but delivering a much improved contender will aid its battle.