Driving and handling performance has not been touched. But the 307 gets a new face, featuring the 407/107 deep grille, larger headlamps and shorter aluminium bonnet, which dealers believe they can use to market the 307 as a brand new car.

Why this renewed belief? Because Peugeot promises this car will not be blighted by the warranty problems and electrical failures of its predecessor, which left customers dissatisfied and dealers out of pocket.

Peugeot has addressed the problems by reducing complexity in the 307’s electrical system.

Peugeot has been cautious in its 2006 predictions, sticking with 50,000 units in a market expected to dip slightly. It also accepts the marketplace is much tougher. In 2001, when the 307 was launched, it faced 29 competitor models; now it faces 51.

Sales will be divided across four body derivatives: hatchback will account for the bulk at 76%, SW will take 11%, estate 9% and CC, which went on sale this month, 4%. Both SW and estate have a 10cm longer wheelbase, improving legroom for rear passengers.

Peugeot has simplified the trim range to five badges to make it easier for dealers to sell on a value for money proposition. Each model has a distinct look according to its position within the line up. The top spec Feline gets a sports front grille with chrome finish, 17in Aidel alloys and front fogs, while the S gets honeycomb grille and 15in Apollo alloys, for instance.

Prices rise for most models by around £200, but drop £200 for the SE badge as Peugeot looks for dealers to sell higher up in the range. “This is where most of our rivals sell their cars,” says Peugeot 307 product manager Dan Gilbert.

Dealers will be supported by a marketing spend double that of recent launches 107 and 1007, to include TV ads and targeted mailings to existing and potential customers.

Peugeot has dropped the poor-selling, entry-level 1.4-litre HDi diesel, widely acknowledged as underpowered, and replaced the 2.0-litre 90bhp HDi with the 90bhp 1.6-litre HDi developed with Ford (also available are 1.6-litre 110bhp and 2.0-litre 136bhp diesels). It has also planted the CC’s 2.0-litre 180bhp petrol unit into all models (badged Feline) and developed a new 140bhp version of the 2.0 unit, which complement entry 1.4- and 1.6-litre petrols.

Typical customers are aged 35-plus (30-plus for CC) split roughly 60% men, 40% women. SW and estates will appeal to couples with children, while most buyers (62%) take the CC as a second car. 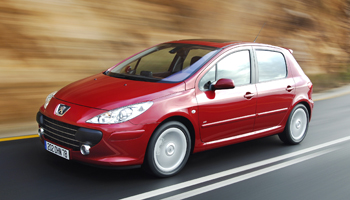 Driving and handling have not changed from the original 307, so expect light, impersonal power steering, sensitive brakes, comfortable ride and smooth cornering.

It’s no sports car – but that’s the point. Couples with children tend to drive in a more measured way, entirely appropriate with the 307’s characteristics.

That’s not to say it can’t up the pace when required.

Gripes remain about the pedals. Because of the switch from left-hand- to right-hand drive, there’s nowhere for your left foot to rest. The pedals are too close together, which is not ideal for those with larger feet.