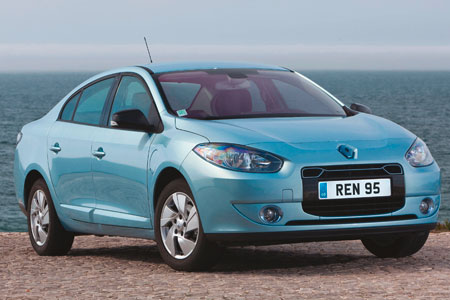 Renault’s forthcoming range of four EVs will only be sold through selected Zero Emissions (ZE) dealers, but the rest of the network still has a role to play.

At the Fluence’s media launch, company executives confirmed all retailers will be expected to handle enquiries before passing them on to their nearest ZE centre.

They will also carry out non-specialist maintenance on the cars.

Being a C-segment saloon, Renault UK acknowledges interest in the Fluence will be limited.

It won’t talk about volumes, but said sales in the six months after the car’s showroom debut – sometime next summer – will only be in the hundreds.

Larger numbers should come when the Zoe supermini arrives in the autumn.

The Fluence ZE is based on the model of the same name which sells in Europe, though at 4.75 metres the ZE is 13cm longer.

The extra is all behind the back axle, allowing the batteries to be fitted behind the rear seats and creating a small, but usable boot.

The styling bears the hallmarks of Renault’s ZE concepts, with blue tinted detailing around the lights and badges.

Charging flaps are hidden on each front wheel arch for convenience and practicality.

Inside, there’s almost no difference to the cabin of the standard Fluence and the Megane on which it’s based.

The fuel gauge has been swapped for a battery charge meter and there’s a blue ZE logo on the passenger side, but that’s it.

Turn the key until you hear a chime, then squeeze the throttle and silently move off.

Press on and there’s a noticeable whine from the transmission, but the Fluence rides and handles in a predictable and safe way.

It’s very easy to drive, though braking – or rather the lack of it – takes a little getting used to.

The car’s regenerative technology means it slows down as soon as you come off the gas even when going downhill. With careful reading of the road ahead, the brake pedal becomes almost redundant.

Range is certified at 115 miles, but could be as low as 50 depend-ing on how the Fluence is driven.

Data on public plug-in points and how far you can get on the current charge is available through the integrated TomTom sat-nav.

Owning a Fluence should be straightforward though not necessarily cheap. Taking into account the Government’s £5,000 grant, the price is £17,850.

That’s considerably less than the Nissan Leaf – currently £25,990 – but you have to pay Renault every month to lease the car’s battery. Price depends on length of contract and mileage, but could easily be £100.

You’ll also need British Gas to fit a Wall-Box charging point at your home, priced at £799.

On the upside, insurance and maintenance premiums are predicted to be 20% lower than a regular car.