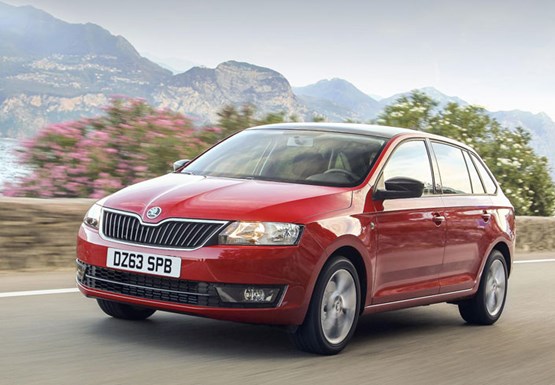 Some questioned Škoda’s decision to bring a budget hatch model, the Rapid, to the UK late in 2012. While technically a hatchback, the Rapid resembles the sort of product that sells well in Russian markets, but doesn’t generally strike a chord with UK customers. Dealers should be happy to see the Spaceback arrive in January, as it is more likely to help them compete with mainstream  rivals.

While the standard Rapid felt like a slight disappointment to those aware of how far Škoda has come in quality terms, the Spaceback hopes to tempt those customers who want a bit more style than the standard model, but still can’t quite push their budget to an Octavia.

The Spaceback is expected to sell 8,000 units in a full year in the UK, while the standard model will take 4,000, with 60% going to retail customers and the rest to fleet buyers. Those figures indicate that the standard Rapid won’t become redundant and Škoda assures us there are no plans to axe it in the UK.

Škoda has pledged to introduce a new model or refresh every six months. This is great news for boosting consumer interest, but dealers will have to expand their premises if they want to stay with the brand as it grows.

The 1.6 diesel SE is likely to be the biggest seller in the UK. This familiar VW Group engine is perfectly adequate for the car, the engine noise is well damped and it’s quick enough in town and on the motorway, but this is not the sort of engine or car that will bring a smile to your face. It does the job.

Brake energy recovery and stop start as standard on Greentech models help running costs and fleet appeal – the 90bhp 1.6-diesel pushes CO2 emissions down to 104g/km, which means it costs just £20 to tax.

The mid-range trim also offers customers a decent level of standard equipment, but like all VW Group models, the fittings and fixtures will be familiar. This is no bad thing in terms of build quality, but it does mean the Spaceback lacks identity.

Škoda’s ‘simply clever’ ideas carry over from the standard Rapid – the ice scraper in the fuel cap, the parking ticket holder, luggage net, waste bin in the driver’s door sill and cooled glove compartment are all included as standard. Practicality and space are the Rapid range’s major selling points and while the Spaceback has a smaller boot than the standard hatch (415 litres vs 550), it beats the Ford Focus by almost 100 litres.

Škoda says the interior of the Spaceback was tweaked after customer feedback from the saloon model. It still hasn’t moved on as far as the Octavia and the Superb, but it’s an improvement over the standard Rapid, which is very basic.

The panoramic roof and glass tailgate option in the Style Pack, expected to cost £1,000-£1,200 in the UK, give the Spaceback a more recognisable presence on the road.  Škoda designer Jozef Kaban says this is how the car was intended to look, but to fulfil Škoda’s remit to deliver an affordable model, both were made available as options.

Despite Kaban’s attempt to increase the Rapid’s appeal, the Spaceback will find it difficult to convert buyers of its rivals, the Focus, the Hyundai i30 and the Kia Cee’d, with its style and desirability.

The price point isn’t great either, with about £500 between the Spaceback and each of its rivals’ entry-level models. Move up to the SE and that’s where customers will see the value, with a higher level of specification than equivalent competitors.

However, even with the upgrades to improve interior quality, the Rapid range stands out as Škoda’s least appealing product offering.

What’s been said about the Škoda Rapid Spaceback

The 104bhp 1.2 TSI version of the Spaceback is actually £190 more expensive than an equivalent Octavia, which isn’t only a much bigger car, it’s also better to drive and classier inside. Alternatively, if you’re considering the Spaceback because you want something smaller than the regular Rapid, the Kia Cee’d and Seat Leon are considerably better buys.