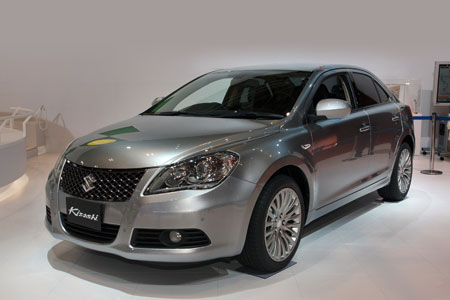 Keen pricing is set to allow Suzuki dealers to field the lowest-cost contender in the growing sector for all-wheel-drive cars.

To be pitched at less than £23,000, the new Kizashi model reaching showrooms in January will undercut every rival and will be at least £10,000 cheaper than the Audi A4 quattro equipped to a similar level.

The price difference – sufficient to allow customers to buy a Swift supermini as well as the Kizashi and still have change – is a significant factor in the Japanese brand’s ambitions to move upmarket.

A halo model with a distinctive appearance, the 2.4-litre D-segment saloon augurs well for a manufacturer keen to show that its abilities extend far beyond the production of sport utility vehicles and small cars.

With touch-screen satellite navigation listed as the only option and likely to cost under £800, the Kizashi comes with automatic transmission, leather upholstery and a power glass sunroof fitted as standard and promises to be good for business.

But even though Suzuki GB believes it will appeal to lower-mileage private motorists aged over 50 who appreciate the security of all-round traction for transport in all weather conditions, only 500 examples will be available over the next 12 months.

“This car has proved to be a success in North America, Australia and in several European countries, but driving into a fresh sales territory is a big step.

"Our brand is unknown in the D-segment so it makes sense for us to adopt a one-step-at-a-time approach.

Quiet and refined, the car has a clever drive system that can be switched between front and all-drive operation at any speed.

In the latter mode, its electronic control delivers up to 50% of torque split between the front and rear and automatically reacts to counter the effects of both understeer and oversteer situations.

The result is a relaxed drive over all surfaces and at all speeds as the most surprising Suzuki yet inspires confidence at the wheel.

Despite being slightly smaller than average for the segment, the Kizashi carries five adults in comfort and its 460-litre boot can be further extended by a split-fold rear seat.