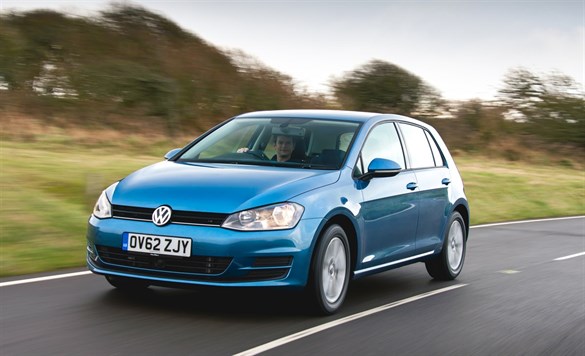 After 38 years it’s not likely that Volkswagen is going to mess up the Golf now and this seventh generation is a solid addition to the German brand’s hatchback legacy.

This new model is based on VW Group’s new MQB platform, which it shares with the Seat Leon, Skoda Octavia and Audi A3.

VW insists the new Golf has been redesigned from the ground up, but it’s still instantly recognisable as a Golf, inside and out.

While it is usually quite difficult to tell different generations of recent Golfs apart, the seventh iteration actually does have some noticeable design changes. There’s a slightly larger front lip and the rear bumper is more sculpted and muscular – but it is still evolution rather than revolution.

The Golf is Europe’s best-selling car, and the best-selling Volkswagen in the UK. It’s an essential product for the brand as the C-segment accounts for one in every three cars purchased.

Fleet customers account for around 68% of new Golfs sold, with 85% diesel-powered. More than 90% are sold with five doors. The 1.6-litre TDI SE five-door will be the best-selling model.

The new Golf is slightly bigger than its predecessor with more room in the cabin and boot capacity has been increased by 30 litres to 380 litres.
Despite being larger, it is actually 100kg lighter than the car it replaces, and up to 23% more fuel efficient.

The Golf has been setting interior build quality benchmarks for the sector for years and the new model continues to maintain that success. It’s still solid, understated and premium enough to raise it above competitors.

There will be the established line up of trims in the UK – S, SE and GT – with both three- and five-door bodystyles available.

Customers will be able to choose from a proven line-up of VW engines, including a 1.2-litre TSI 83bhp returning 57.6mpg, 1.2-litre TSI 103bhp with 57.6mpg and 114g/km, plus two 1.4-litre TSIs offering 120bhp and 138bhp. The 1.4-litre 138bhp features really clever Active Cylinder Technology which can deactivate two of the cylinders under certain loads, allowing it to achieve 60.1mpg and 109g/km.

The trend for technology usually being saved for larger models and filtering down to smaller segments is followed here, with the new Golf boasting a plethora of fancy gizmos.

Safety systems include, as standard, a new Automatic Post-Collision Braking System which automatically brakes the vehicle after a collision to reduce kinetic energy. Other electronic aids include automatic distance control, front assist and city emergency braking (all standard on SE models and above). Also available are a Driver Alert System (standard from SE), a camera-operated Lane Assist system and a High Beam Assist system.

Other new technologies include the latest Park Assist, which can parallel park itself and also magic the Golf into a reverse bay space.

The new Golf still offers a refined driving experience, with predictable and responsive steering. It’s not quite as nimble as the Focus, but it’s precise and the range of engines on offer all work really well with the MQB platform.

While it doesn’t beat the Focus for driving pleasure, it’s ahead on build quality and the badge appeal still beats the Blue Oval.

What’s been said about the Golf

There is no doubt about it: the Golf Mk7 hits bullseye. It is everything we expected, and more – a surprisingly rewarding driver’s car, more refined than any of its rivals, very comfortable and compliant, and a roomy, quality piece of kit. Everybody from Vauxhall to Mercedes, and even the Golf’s Audi and Seat stablemates, should fear it. The Golf has always been exceptionally good; but this is an exceptional Golf.

There’s more kit as standard, new safety features, it’s more fuel efficient and there’s more room. However, the new tech is optional on the entry-level model and it’s a very similar design to the previous generation.

Given 20 miles at the wheel, even the biggest car enthusiast would have to agree that this new Golf is a world-beater.