As manufacturers become more extreme with the performance variants in their model ranges (think Astra VXR and Renault Mégane 225), the competition in the hot hatch and sports saloon sectors is getting tougher.

Skoda hasn’t typically been associated with performance cars, but the Octavia vRS is, in fact, the quickest and most powerful car it has ever produced.

The Czech manufacturer is hoping that its introduction will help boost brand awareness of both the Skoda and vRS brands – the performance range currently accounts for 12% of total sales in the UK.

In terms of looks, it’s more ‘warm’ than hot hatch but the subtle differences such as the deeper bumpers, rear boot spoiler, twin exhaust, green brake callipers and 17in alloy wheels all hint to the performance aspect. Larger 18in alloys are available as an option.

Inside it’s similarly understated with half-leather sports seats, which are supportive in all the right areas, plenty of aluminium trim, black rooflining and a three-spoke steering wheel.

The Octavia is available in estate and hatch variants, but expect the latter to make up the majority of sales: around 2,200 of the total 2,900 it’s aiming for in 2006, thanks to its more conventional aesthetics as a performance car.

It is powered by the same 2.0-litre T FSI engine used in the VW Golf GTI – the first turbocharged powerplant to feature direct injection, which means a cleaner burn, more power and better fuel economy.

The vRS is aimed at a broad range of rivals from the Vauxhall Astra VXR to the Volvo V50 T5, but while it may not have the extreme looks or outright performance of some of the competition, the combination of usable power and everyday practicality is a compelling proposition.

With just under 200bhp and a 0-62mph time of 7.3sec, it’s fair to say that the vRS is not a slow car, but while the versatile turbocharged 2.0-litre engine pulls well, the Octavia never feels as though it’s got the raw pace to get the adrenalin pumping.

That said, it does handle very well. The steering is well weighted and direct, and there is an abundance of grip, while modified shock absorbers and lowered suspension result in a ride that is firm, but not harsh. Consequently, the vRS is a car that inspires confidence on the twisting roads, but still retains its composure at motorway speeds.

It is due to go on sale in December with the hatch costing £17,500, while the estate will carry a £700 premium. Thanks to its VW links, it certainly has the quality to compete with the likes of the V50 and Mondeo but its greater success depends on whether more buyers can be persuaded to buy into the ‘Skoda practicality meets performance’ combination. 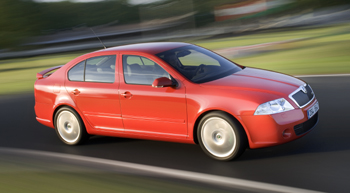