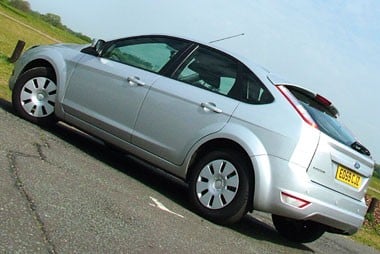 Let’s hope that Ford’s announcement about price cuts to its smaller and medium range models will include slashing the price of the Focus Econetic by about £3,000.

We’ve just bid farewell to this car after running it for three months during which it failed to put a viable case for saving cost over its typical ownership period. The £20,477 list price, including the stop/start system, is excessive for a car which ultimately does its job very well but has few advantages over cheaper rivals. Its 99g/km CO2 and official 74.2mpg combined economy (we’ve achieved nearer 56mpg during our test) are bettered by the Toyota Auris T4 HSD which lists at some £1,500 cheaper.

Admittedly, Focus Econetic is a small volume derivative (0.5% of Focus volume) aimed at fleets and leasing companies rather than private buyers, so most of its corporate customers would expect a significant discount. They’ll also need to cover almost 50,000 miles before changing cars in order to get any real value.

More private Focus buyers tend to choose petrol power over diesel due to the lower purchase price and fuel cost, which proves more cost efficient for them over lower mileages.

In fact, Ford is developing more efficient 1.6-litre and 1.0-litre Ecoboost turbocharged petrol engines which are expected to be used in the next-generation Focus from 2011 and will continue to appeal to the retail segment. It wants these to provide diesel-like performance, and says 20% savings in emissions and fuel will be possible.

Ford told AM that as its stop/start system is added to other models and sold in increasing volume, the cost of the technology will be lessened with obvious benefits to its customers.

Cost aside, this Focus upholds the brand’s reputation for quality, reliability, comfort and handling.

Low rolling resistance Michelin tyres put energy saving ahead of ultimate roadholding, and longer rations for third, fourth and fifth gear put efficiency and noise reduction ahead of overtaking punch, but nevertheless the car is a very capable performer.

Fleet News
Fleets will see a more favourable price, but it’s not such good news for the driver.
A 20% taxpayer would be almost £100 a year worse off than in Seat's Leon Ecomotive S.