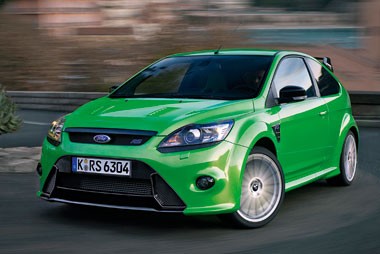 The eye-catching Focus RS only accounts for 3% of the model’s sales, but relishes its role as a halo version of the popular car.

Performance car enthusiasts are its bread and butter buyers. A Ford spokes-man said some customers will be lifelong RS fans, others will be looking to own the best hot hatch on the market.

“Some customers have been downsizing from much more expensive sports cars and are wowed by this relatively affordable 300bhp car,” he added.

But Ford said RS “really occupies its own niche – it is more extreme than a regular hot hatch, but easier to live with than the race replicas”.

RS stands out against its rivals by giving the performance of a supercar while being as practical and easy to live with as a regular family hatchback, Ford added.

Since the new model went on sale in March, it has sold around 2,750 units.

Upsell opportunities for dealers include paint (£425) and part leather seats (£500).

There are two packs – the first has climate control and rear parking sensors and costs £750.

Residual values are typically strong: it holds more than half its value (52%) at 3yr/30k.