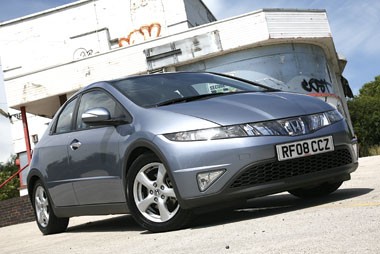 I’m actually quite torn between the funky exterior and interior styling of the Civic versus the lack of visibility that comes as a result.

There can also be a sense of claustrophobia due to the dark cockpit-like driver’s seat, but this can be cured by opening the panoramic sunroof.

All the friends that have got into the Civic are impressed with its digital dials and sloping style, but reversing out of my garage onto the narrow streets where I live is a bit of a gamble in the mornings.

One thing that’s also starting to become a problem is clearing the rear window in the mornings. It might sound trivial but on a cold winter morning with no rear wiper to get rid of the frost and water build-up, it means a few extra minutes spent stationary.

The Civic’s 2.2-litre diesel pulls well through the gears and was great cruising down to Reading for AM’s Finance Conference. The revs on the Civic are linked to a meter on the dash which gives a series of green dots to show how economically you’re driving.

It’s a really good technique for changing your driving habits, but it can also become frustrating if you’re a miser like me, constantly knowing how much fuel you’re draining. As a result, my driving has become a lot more sedated, which is the whole point, I suppose.