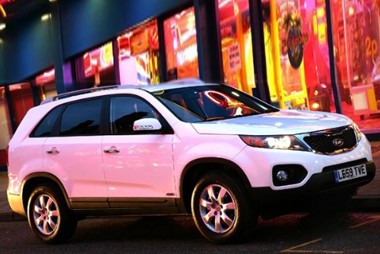 The new Sorento brings the Kia range close to having a very fresh and consistent line-up for dealers in the UK.

Kia’s family grille is now present on the front and the new model has more of an individual style rather than taking design cues from successful German rivals.

The company has moved quickly in rebranding what was a chunky SUV into more of a sleek crossover model, more in-line with what customers are demanding in the market now.

The Korean manufacturer is expecting 2,800 sales from March until the end of this year and diesels will account for a massive 95% of them.

Kia believes the Sorento’s improved fuel economy on the diesel to 43.5mpg and seven-seats as standard will make the majority of customers opt for the new 2.2 CRDi. The 2.2 diesel replaces the 2.5 diesel and boosts performance by 26bhp and reduces emissions by
25g/km of CO2 on the manual and 34g/km of CO2 on the automatic.

Customers can choose to have a five-seat version if they want and there’s one petrol engine on offer for those that don’t want to go for the diesel.

The value and specification combination of the Sorento KX-1 and KX-2 with four-wheel drive will be the biggest sellers with an equal share for both the manual and automatic versions.

Kia thinks fleets will be tempted by the diesel option too because of its £22,495 entry level price and CO2 emissions of 171g/km. While Kia said it thought the Sorento was an excellent fleet prospect, it would not say how many it was expecting to sell to corporate customers due to the “uncertainty over the national economy in 2010”.

A smaller 2.0-litre diesel is expected to be added to the range of engines on offer, but it is not clear when this will be.

As with all Kias now, the Sorento comes with a seven-year warranty as standard which is a powerful marketing and selling tool when trying to convince customers.