Our long-term test Honda Civic diesel is putting on the miles slowly – it’s not the most popular car in the AM fleet. But also creeping up is the fuel economy.

At the 5,000-mile check RL53 CPN had been achieving 48.6mpg (up from the 44mpg at 3,000 following attention to a faulty oil seal), which gives us hope for the advertised combined cycle consumption target of 56.5mpg.

The reason for this sporty, attractive and practical five-door’s lack of popularity is threefold – and, for dealers, they are areas that could impact on customer satisfaction. One: the steering stiffens up sporadically for no apparent reason at low speeds (Honda UK has not been able to find fault with it – may we suggest that’s because a Honda fault is a very rare thing indeed? We gave up on the local dealer, who suggested our drivers were turning the steering wheel too quickly). Two: the 99bhp 1.7-litre turbo-diesel is un-Honda – rattly on start-up, thrashy under power, and lurcher-like in traffic.

Three: the diesel engine also knocks the stuffing from the Civic’s outstanding – in petrol format – ride and handling. Dynamically, it’s a driving chore rather than the pleasure it should be, given its pedigree and Type-R handdowns.

On one of its plus sides, the CDTi maintains cruising pace with acceptable road and engine noise and it gets there quite rapidly with some energetic shuffling of gears.

Roll on the new Honda-made diesel engine, because the Civic really deserves it. 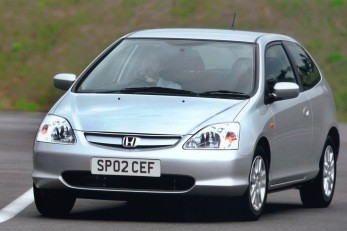