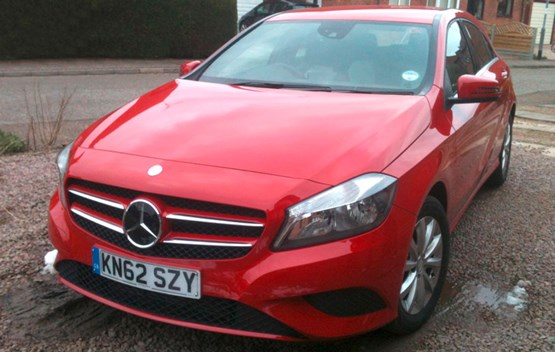 The Mercedes-Benz A-Class has a significant weight to bear. It is charged with winning over company car drivers and private buyers who shunned the staid previous model in favour of a BMW 1 Series or Audi A3.

So far, it seems to be making strides, supported by clever marketing and competitive offers in the business car sector.

While AM has been using the diesel flagship in the range, the A220CDI AMG Sport, our sister magazine Fleet News has been running an A180CDI Sport model, its lower-priced and lesser-powered sister. We recently drove them back to back and found the two cars, although effectively non-identical twins, have totally opposing characters.

The A180CDI is the more sensible, understated and frugal one, while the A220CDI AMG Sport is the slightly flash, arguably better-looking, binge-drinking other.  Each has its good and bad points.

I found the A180CDI slightly uninspiring after experiencing the A220CDI, with its sportier AMG bodystyling, paddle-shift auto transmission and heaps of equipment. Except for it bearing the precious three-pointed star I couldn’t perceive why the lesser model would get chosen over a VW Golf. However, others in the AM team actually preferred its understated presence.

Without question, the A180CDI is more efficient on fuel economy and tax. It is averaging 64.2mpg, compared with the larger-engined A220CDI’s 51mpg, and CO2 emissions that are 17g/km lower give it a BIK rate four percentage points lower on a P11D value that is £6,190 lower, so there’s a clear appeal to company car users on a budget.

It also has a more forgiving ride than the lowered sports suspension which comes as standard with the AMG Sport specification.
Nevertheless, the A220CDI AMG Sport feels more special both to d

Carbuyer.co.uk
At £19,000, the entry-level A180 petrol A-Class is pretty cheap, while the A180 CDI diesel is the first Mercedes to emit less than 100g/km of CO2, which of course has massive tax benefits.

Auto Trader
While Mercedes carved itself a niche for the previous A-Class, it could never compete with the big-hitting models from Audi and BMW. Now it can not only compete, but beat them in some areas.

Daily Telegraph
The A-class will sell by the bucketload purely on the strength of its provenance. The Volvo V40 and the Audi A3 have marginally better dynamics, but the Merc gives you a star on the bonnet and that’s important in this badge-obsessed world.rive and to be in, plus it attracts more admiring glances from my neighbours – isn’t that a key reason for choosing a premium brand car?