The Sonata has been a dependable workhorse during the three months it has been with us. Although its 2.4-litre engine has drunk its way through a little more fuel than we had hoped, the car has also notched up almost 4,000 miles without any stress or strain.

Having bags of space in the cabin and boot has made it a strong contender for long journeys, as it can easily transport four adults in comfort. In fact, I’d say this is its most notable strength. It’s roomier than a VW Passat and its ride is more supple, too. Its automatic transmission and the cruise control make the miles fly by.

The Sonata lacks the quality materials and driver involvement of, say, VW’s Passat. However, Hyundai seems to have the premium German brands in its sights. On several occasions, people have mistaken the Sonata for an Audi at a distance, thanks to its European-influenced design.

Maybe Hyundai’s sales strategy should be to completely de-badge the Sonata to help it compete in the brand-conscious, upper-medium fleet car segment.

Improvements could be made to the automatic gear changes: the Hyundai takes off with enough force to throw you back in your seat, and you really feel for the engine when you first hit fast roads. It would be a much smoother ride if it moved up a gear more quickly, and a fifth gear would also help.

The Sonata will have stronger appeal to value-led private buyers because it can fulfil a family’s transport needs with ease. However, this car takes a big hit in depreciation, so is best targeted at buyers who’ll hold on to it for longer than the typical three years. Nevertheless, once some nearly-new or used examples filter back to dealers’ forecourts, still covered by Hyundai’s market-leading five-year ‘peace of mind’ warranty, customers will find it even more of a bargain. 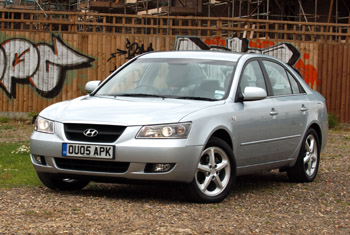