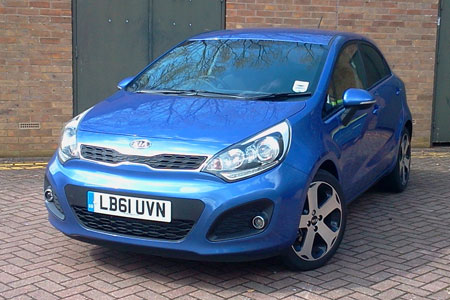 So far my time with our Kia Rio long-term test car has been relatively limited since its arrival in April, as all our test cars get swapped regularly between Jeremy, Tom and myself to ensure they all get used in different ways, outside of our frequent visits to dealers and manufacturers.

Tom has recently become the AM journalist team’s daily commuter since settling down in Cambridge.

Jeremy is most local to our office on the outskirts of Peterborough, but has possibly the most active weekend social life given that he’s in a band and has no kids.

In contrast I, living on the opposite side of the city with three children ranging from teenager to toddler, am able to provide the perspective of a family motorist.

So I was keen recently to grab the keys to the Rio while the kids were on half term to see how it functioned as a second car in the family.

My wife’s Ford S-Max is the usual school-run taxi. So the break meant I could put the Rio to use in shuttling the two youngest ones to their grandmother’s ahead of my eight-mile trip to work.

Thankfully the Rio is pretty spacious inside.

But once it was secured and my daughter strapped in legroom wasn’t an issue with the seat returned to the normal position.

The plethora of storage areas in this highly-specified Rio also helps to make it attractive as a second car in the family.

Nets behind the front seats cater for magazines and toys while the rear doors’ inner panels have deep pockets for drinks bottles or Nintendo DS consoles, as is my stepson’s preference.

Up front, there is a spacious glovebox and centre console box perfectly sized for wipes and other paraphernalia connected to travelling with kids, and the double cup-holder almost begs me to go get my Starbucks fix that makes parenting so much easier.

The 288-litre boot is reasonably-sized too, able to cope with a lightweight pushchair easily.

I’m actually pleased that it’s not vast, as with previous large estate cars and Mrs Rose’s S-Max I’ve frequently found it necessary to climb in the back to reach shopping that’s slid up behind the rear seats.

That can’t be part of a good ownership experience.