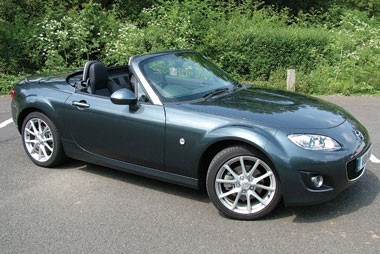 Any brand with a convertible in its range needs to ensure the car is appealing to buyers beyond the giddy highs in temperature we may experience at any time between April to November these days.

The rapid emergence of the retractable roof in the market has helped overcome any doubts about the comfort of convertibles over old school canvas and the MX-5 has a simple to use and rapid function: a handle to release the roof catch and a button to get the roof panels moving.

Note that it is reputedly the world’s fastest power-operated hardtop, opening or closing in 12 seconds.

It is reasonably well sound proofed too, not so much of concern because of high winds, but the engine is quite guttural in tone and intrudes in the cabin to the point where the stereo volume has to be nudged up a little occasionally.

And making it more assuredly a car for all seasons are features such as front fog lights, heated seats and safety features, anti-lock braking, electronic brake-force distribution, stability and traction control as standard.

Our test car has limited slip differ-ential and side airbags fitted as optional extras.

One issue that has caused concern is how temperamental the alarm appears to be. It has started to go off without obvious cause.

My ‘favourite’ occurrence was at 2am. No matter what I did with the key fob or with the car (opening and closing doors/boot) it wouldn’t stop going off every 10 minutes or so.

I resorted to ear plugs and hoped the neighbours slept like bears in winter.

I believe there is an issue with the intruder sensor, designed to detect movement inside the car, that can be turned off on the fob if pressed within 20 seconds of locking the doors as deactivating it appears to solve the problem.

The handbook warns of the risks of activating the alarm if metal objects are kept inside.

I’m not certain an iPod would count. I’m guessing I’ve pressed the intruder sensor button by mistake while attempting to lock/unlock the car or open the door in the darkness.