Mazda has undoubtedly undergone a revolution in the past three years and now the badge is beginning to carry the kind of kudos afforded to its Japanese rivals.

But while cars like the RX-8 have taken the accolades, it is the rather more sedate offerings such as the Mazda3, launched in October 2003, that have really helped boost sales volumes.

And it’s not hard to see why, as the hatchback is a very easy car to live with.

The cabin is roomy, particularly in the back and the hatch is cavernous enough to swallow a surprising amount of luggage.

Upfront, the driving position is excellent and there’s plenty of head and leg-room, even for six-footers.

It’s easy to drive with a slick gearbox and light steering, which still offers enough feedback to keep things interesting.

So far, the Mazda has acted as a useful long distance runner in the AM office. Despite only having a 1.6-diesel engine, it’s more than capable of holding its own on the motorway, although overtaking does sometimes require precision timing and gear selection.

Our only gripe is with the fuel economy. The manufacturers figure claims 56.5mpg should be achievable on the combined cycle, yet our model is returning around 30mpg, despite the majority of its time being spent on A roads and motorways.

We’re hoping this will improve as we clock up more miles, but it is disappointing given that our previous long termer, the Volvo S40 1.6D, which shares the same Focus- based platform and engine, was seeing figures of around 40mpg from the off.

The Mazda3 manages to match the Volvo for driving pleasure, and its not too far behind when it comes to cabin design and quality.

Given the price of just under £16,000 it’s a compelling proposition and with low emissions (135g/km CO2) it’s no surprise that it proves popular among company car drivers. 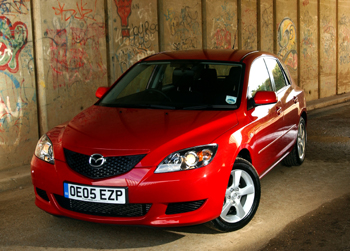