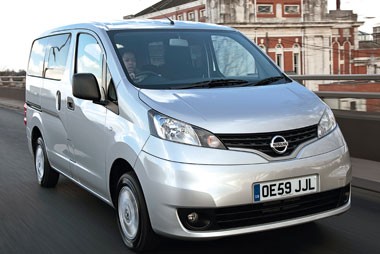 The NV200 Combi’s primary function is for carrying seven adult passengers in comfort. Whereas most car-derived people carriers will have the third row of occupants crammed in, the NV200 offers a reasonable amount of leg room.

This new model is surprisingly compact for a van at 4.4m long, 1.86m tall and 1.695m wide, it’s somewhere between a small and medium size LCV.

Nissan is trying to straddle two market segments, providing almost as much interior space as much larger LCVs in a package no bigger than rival car-derived vans.

One thing dealers should highlight is that the NV200 won the International Van of the Year 2010, which is proudly displayed on the back window.

As vans go, the NV200 is actually quite good looking with an aggressive front end.

Power is provided by a 1.5-litre turbo diesel developing 83bhp which is fine when the van’s empty, but put a full load in and it can struggle with the extra weight.

A tight turning circle is handy for manoeuvring, but handling out on the roads is still very van-like, and not “agile” like Nissan describes.

The NV200 performs brilliantly as a people carrier, but when called on to shift large items in its capacity as a commercial vehicle, it falls slightly short.

Obviously having seven seats is going to become a problem when trying to fit large items into the car, but the way the seats fold away doesn’t leave much width at the back of the van. It would be much better if the seats were removable or if there was some kind of fold flat system.

The two sliding doors feature privacy glass and sliding windows for letting in fresh air.
AM’s SE trim is basic but sturdy enough to withstand scuffs and scrapes, although one of the plastic seat covers did fall off after one of the third row seats was folded up to the side of the van.

A neat feature on the SE spec is the reversing camera which fits into the digital screen just above the steering wheel.

The NV200 Combi is a well specified compact people-shifter, but Nissan needs to get rid of the rear side glass for it to be of interest to commercial users.